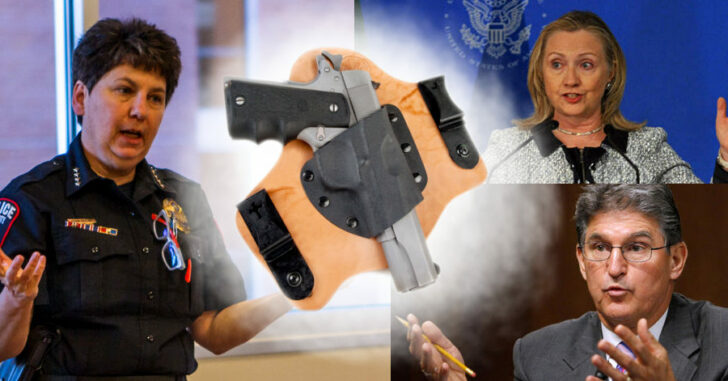 Every day we cover concealed carriers coming to the rescue.  Whether it’s their family, friends, or just helping out a person in need, there’s plenty responsible, proud gun owners out there that bring pride to the Second Amendment.

But why isn’t this stuff discussed when a bad thing happens?  Why is it we’re thrown under the same bus as non-law-abiding violent criminals?  Why are we subject to so many pot-shots?

Here’s a fun fact we all know: concealed carriers aren’t out there looking for a fight.

In fact, most would be just as happy never needing to use their gun in an actual self-defense situation.  It’s something that gets glossed over all too often in mainstream hit pieces like this one from the Milwaukee Wisconsin Journal Sentinel.  Why?  Because the evidence against concealed carry is largely anecdotal.

It takes zero credibility and zero analysis to come up with some outrageous example of someone acting the fool.

For every one of those tall, spun tales — there’s countless where the concealed carrier is the force that stops the bad guy.

But, you know what happens when that’s not happening?

That’s right.  For the vast majority of law-abiding concealed carriers out there that carry concealed every day, the handgun stays in the holster.  It usually comes out for training, maintenance, and some of us even take them off in the shower (unconfirmed, no source cited).

Self-Defense Is An Inalienable Right

Here’s the big cheese on this situation: the right to defend yourself from an attacker is not up for debate.  It’s an inalienable right.  No one has the right to attack you, your family, or your property.

When we get confused, as a society, as to the role that guns play in it — it’s important to remember that our society exists because of guns, not in spite of them.

Concealed carriers aren’t out there, prowling the streets, trying to start fights so they have an excuse to draw their gun.  In almost all situations, a concealed carrier is actually going out of his or her way to avoid a fight.  Why?  Because the responsibility of carrying a lethal firearm means that we’re just not interested in getting into foolish scraps with other people.

So this perpetual nonsense about concealed carriers being a threat on school campuses or even school zones is ridiculous.  That won’t stop the MSM from broadcasting all sorts of “experts” who denounce an individual’s inalienable right to protect him or herself in all situations.

Next time you see someone post a ridiculous meme on Facebook or Twitter, link them over here so they can get a nice solid dose of reality.  The only gun control we need is better marksmanship.