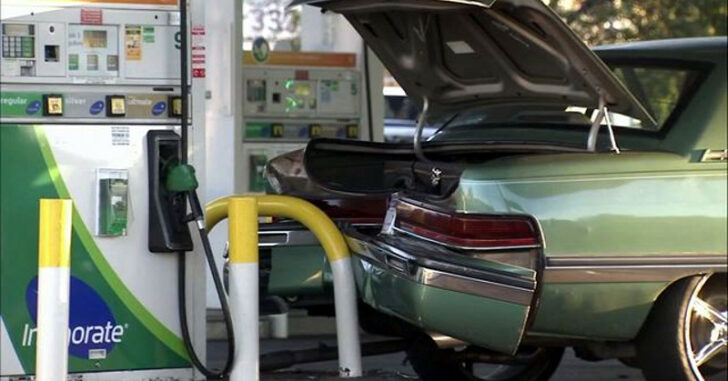 DETROIT, MICHIGAN — What could be chalked up to be just another day in Detroit, a confirmed Concealed Handgun License holder was able to thwart the attempted theft of his car at a gas station.

WJBK reports that the victim was pumping air into his tire at a BP gas station on Outer Drive when a man in his mid-30s jumped into his car and attempted to leave with the car.  The CHL holder fired at the suspect, causing him to crash into a barricade blocking the pumps.  The suspect then got out and reportedly chased the CHL holder with a crowbar before fleeing the scene altogether.

Police are still reviewing surveillance video to determine the identity of the alleged carjacker but it is not believed, at this time, that he was hit by any bullets fired by the CHL.

What on earth would cause a man to open fire and then flee from a man wielding a crowbar?

Which of those three sounds like it makes the most logical sense?

Michigan State Police confirm the carjacking victim had a valid CHL, so we can only assume that he’s had some remedial amount of training in the use of pistols.

This is why we never take well-enough to mean well-enough.  If you’ve completed state-mandated training for your concealed carry permit, assume that it is literally the minimum that the state feels comfortable with you knowing prior to going out there in the world.  This isn’t advanced weapons handling or anything of the sort.

So, when you go to get your concealed carry pistol and you say, “oh geez, this $200 used chunk of polymer with a barrel looks like its within budget…” Strongly reconsider that statement.

This story has an acceptable ending: everyone lived, no permanently damage was wrought upon the gas station or bystanders.  The victim definitely is going to need some body work but that’s nothing insurance shouldn’t be able to handle.  At least he knew enough to retreat (*cough* after his gun jammed *cough*) rather than square off with a carjacker with a crowbar.

Previous article: [VIDEO] TRUMP On 2A: "I Have A License To Carry In NY. If Somebody Attacks Me, They're Going To Be Shocked." Next article: DISCUSS: Parent Who Left Pistol In Unlocked Car At Elementary School Surrenders His Permit And Gun