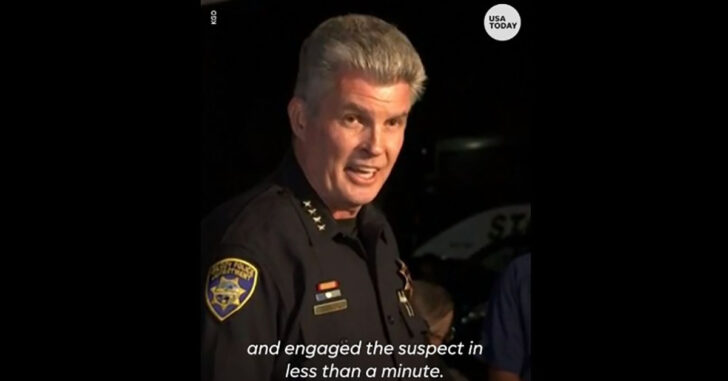 GILROY, CALIFORNIA — A 6-year-old boy, a 13-year-old girl, and a man in his 20’s were all killed yesterday by a 19-year-old who opened fire on thousands of people enjoying an evening at a Garlic Festival, which was celebrating it’s 41st year.

The suspect, who was a native of Gilroy, was shot and killed after police responded. No motive for the attack has been discovered.

Police say the firearm, an “AK-47-type”, was purchased legally in Nevada just a few weeks earlier.

Whether or not security was present at the event is a good question. According to news reports, metal detectors were set up and all people going to the festival needed to pass though.

Unless, of course, you’re looking to bypass the security.

People attending the festival must pass through metal detectors and security before getting into the park.

The suspect entered the festival by cutting through a fence, officials said.

If there isn’t any security to… maintain security… who is responsible for this? Well for starters, the suspect.

Beyond that, disarming people at the gate is something that we see all over the Country. Large events, many people, and they don’t want anyone bringing anything in that can be used to do harm to others.

But what about protection? If some madman does sneak in, just as we see in this case, who is going to protect the people inside?

The police did, in this case, but not before 3 were killed and 15 injured.

How many gun owners do you think were in that crowd? How many concealed carry permit holders? If they were allowed to bring their firearms, which they carry everywhere else, maybe this suspect would have been taken down sooner.

It’s about time that these places are sued for their lack of security, after stripping the rights of people at the door. If you’re going to tell me that I can’t bring my firearm into an event, what are you going to do to protect me?

The honest truth; they can’t.

Previous article: [VIDEO] Wife Has Husband's 6 As Man With Gun Approaches, Then The Roles Reverse Next article: Convicted School Shooter, Who Applied For Concealed Carry Permit, Dies In Car Crash