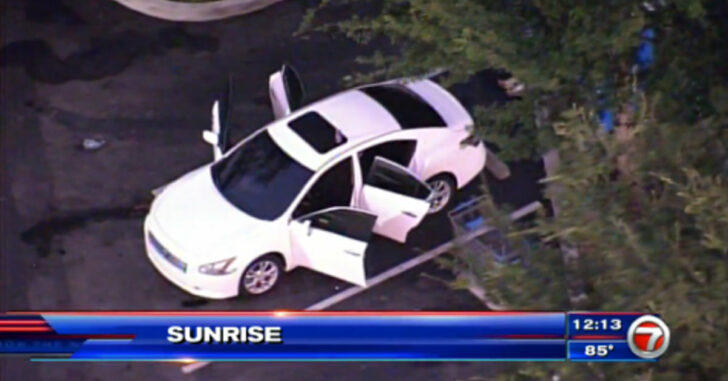 SUNRISE, FLORIDA — Starting his shift at 4 a.m., one concealed carrier was expecting his day to go like any other. Unfortunately, some armed robber staking out the parking lot decided to put a gun in his face while he was still seated in his car.

“Somebody tried to rob him, and I guess he just defended himself,” said a co-worker to News 7 Miami.

According to eyewitness accounts, the Walmart employee got out his own gun and opened fire on the suspect. The armed robber died at the scene.

“There’s just too much going on,” said nearby resident, Brigitte. “It’s wonderful that he could protect himself, otherwise he’d be the one behind the tarp.”

The armed robber was described as being just a teenager, but as we’ve already seen in other cases — teenagers who think violence is a tool to get what they want may be in for a big surprise.

Police confirmed that the employee who defended himself had a valid permit to carry concealed. Faced with a life-or-death situation, he moved very quickly to resolve the situation judiciously.

He faces no charges and his family is reportedly elated that he survived the encounter.

“They said it was the other person, but when I woke up and heard about it, I was crying because, I mean, my brother is all I got and my kids,” said his sister. “But I’m sorry to hear what happened to the victim, but my brother works hard, he works hard to take care of him and his child.”

The man knew what he had to do in order to survive. He knew he had to fight. It’s something no one wants to face but when the choices are getting killed by some punk teenager in the parking lot or going home to see your own child, the choice is simple.

Popular culture and media promotes the idea to children that you can be a real tough guy if you steal a gun and use it to rob people and threaten their lives. The reality is that people caught up to that trend awhile ago. If you’re too dumb to look around and see people are acting more and more defensive when they go places, you’re in for a real bad time.

Robbing a man in the early morning darkness, you best be certain you’re doing it in a state that outlaws guns. In a state like Florida, however, your best bet is to find a new career path. Maybe, yanno, work a few shifts at Walmart.

Another life cut short because the boy was too dumb and too violent. Better him than the man who just wants to get home to see his kid after a long day at work.

Previous article: Armed Teen Posts Pictures Of Himself With Handguns And Then Kicks Down Door Of Stranger's Apartment, Opens Fire -- Meets Deadly Resistance Next article: Private Sale Goes Awry When Robbery Suspect Uses A Taser And Ends Up In A Gunfight