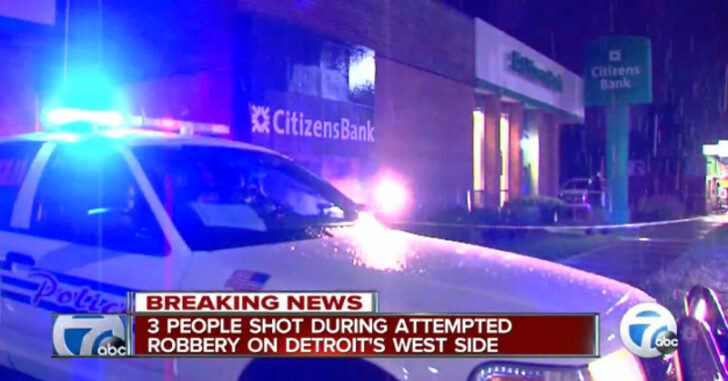 DETROIT, MICHIGAN — According to news sources at WXYZ – Detroit, a 50-year-old man and two armed robbers are currently being treated for non-life-threatening gunshot wounds following a shoot-out at an ATM.  Police say that a resident of the neighborhood was walking down to a Citizen’s Bank ATM when he spotted two robbers approaching.  One was allegedly armed with a sawed-off shotgun and the other with a handgun.

While details are still emerging, it appears that the concealed carrier engaged both suspects and sustained non-life-threatening gunshot wounds in the process.

A Detroit police captain was interviewed live on the scene and said that two 18 to 19 year-old armed robbers approached the Citizen’s Bank and declared that they were going to rob everyone.  The man at this point turned and engaged the robbers.

“Our victim was a confirmed CPL (concealed pistol licensee).  He produced his weapon and a gunfight ensued,” confirmed the police captain to WXYZ news reporters.

No other bystanders were harmed or injured in the exchange and both robbers are now in custody.

We will update as details emerge further on this case.

Previous article: [CCW IN ACTION] Teenager Puts Gun In Driver's Face, Demands Sunglasses -- Gets Bullet Instead Next article: Q: "Shoot a car window to save a dog or child from heat?" A: WHAT?!?! NO - NEVER!