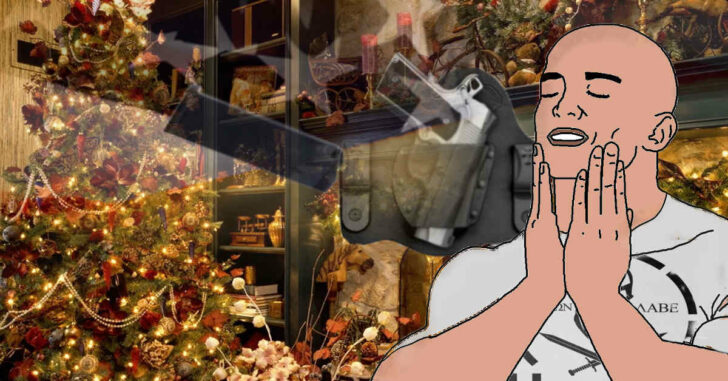 Concealed carriers know: ain’t nothing free when it comes to firearms. Training, ammunition, magazines, cleaning equipment, permit fees… And let’s not forget the handgun itself.

That’s why we’re helping out our concealed carriers working covertly under the Christmas tree. Here’s a short list of 6 items that any concealed carrier could use — and all usually under $50.

This takes Secret Santa to a whole new level.

While we’d love to recommend a good laser/light combo that attaches under the 1913 rail of most modern pistols, it’s just not practical for many concealed carriers. With flashlight/laser attachment, you do get the instantaneous illumination and marking of targets. You don’t, however, get that good fit for many molded high retention inside the waistband holsters.

A good pocket flashlight is sturdy, waterproof, uses a durable lithium ion battery and fits in the pocket of the average jeans. It gives that concealed carrier an opportunity to illuminate a potential adversary or simply get some clarification in a darkened area.

It’s completely possible to get a good, durable pocket flashlight for under $50 and it’s sure to be helpful for that concealed carrier in your life.

#5: High Retention Inside The Waistband Holster

Believe it or not, for less than $50 you can pick up a high retention inside the waistband holster for that special someone’s favorite everyday carry. It’s one less excuse he or she has not to carry and it’s definitely able to keep that pistol ready at a moment’s notice.

It makes a great gift under the Christmas tree and it’s something that concealed carrier will actually use.

There’s some expensive, thick gun belts out there that tout their qualities of high end leather, double, reinforced stitching and all sorts of cool features. But, for under $50, you can still get that concealed carrier in your life a quality gun belt that keeps his trousers up and his gun from sagging. It’s not terribly difficult and it’s one of those presents that will get used on a near daily basis.

You may not believe it, but there are pistol gun safes out there for less than $50. They’ll fit a pistol and a couple magazines and that’s it. As silly as that may sound to some gun owners, for concealed carriers it’ll be a godsend. As we all know, there’s some places we just can’t go with our concealed carry handgun. And for those souls who have to travel over state lines to do business, they’re certain to appreciate the safety and security of placing their handgun and magazine into a safe — thus complying with part of the conditions of FOPA.

With the average magazine capacity for a concealed carry pistol being somewhere between 6 to 10 rounds, even one box of high quality jacketed hollow point ammunition can make the difference. Most high-end boxes of quality defensive ammunition typically run between the $20-30 range for a box of 20-25 rounds. Bag two for the Christmas tree and you’ve just filled your concealed carrier’s everyday carry magazines for a while.

We hope this list helps you out a little bit during the last few weeks of the Christmas shopping season. Remember: practical is good and cheap doesn’t mean stingy. Look out for each other over the holiday season and keep carrying everyday, everywhere possible.