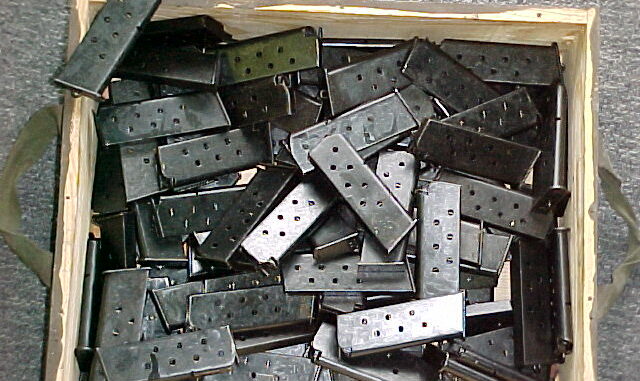 We ran a Question of the Day asking the number of ammunition magazines (“mags”) a pistol owner should own. That’s a matter of debate and personal preference. In terms of new shooters carrying semi-automatic pistols (handguns that accept magazines), I recommend a minimum of four: two for practice and two to carry. How you manage – i.e. keep and use – those magazines is a critical not-to-say life-or-death issue. Start with this…

Yes, carrying a spare mag is a bit of a PITA, but there are plenty of comfortable carry systems for spare magazines. Worst case: put one in your pocket. If you do, don’t put anything else in that pocket. No change (dimes love to wedge themselves into magazines), no phone, no nothing.

The ammunition magazine is the most likely part of the gun to malfunction. If your gun doesn’t work in a gunfight, well, that really sucks. When the gun she don’t run, the “tap rack” drill is your first port of call. Smack the magazine underneath your gun and rack the slide to chamber a fresh round. If that doesn’t work, say you suddenly “discover” you’re out of ammo, change magazines. Dump the old mag and insert a fresh one.

That’s not the easiest process in the world – especially under stress. Train to get it right. Wear your conceal carry clothes. Use your conceal carry system (gun and holster and spare magazine). Unload your gun, safety check it (make sure it’s unloaded), put the ammo in a separate room, safety check the gun again, then load two magazines with snap caps (inert cartridges, available at any gun store). Practice changing mags, always keeping the gun pointed in a safe direction and keeping your finger OFF the trigger.

Even if you don’t train your mag changes, even if you think tap rack is a form of sexual harassment, carry a spare mag. It may take you a lot of fumbling to switch magazines but what’s the alternative? Run! Hide! Bite, scratch, kick, throw a chair! Seriously.

Whenever you practice changing mags let the empty mag fall to the ground/floor. I repeat: let it go. Drop it like it’s hot. An empty magazine is no use to you whatsoever. Actually, it’s worse than that. You do NOT want to have an empty magazine in your hand when you’re in the middle of a defensive gun use. So train as you mean to fight. NEVER catch an empty magazine – not at the range, not at home, never.

That means your discarded mags will hit the dirt/floor – as they should. That also means they might get stepped on, dirty, bent and otherwise damaged. You don’t want to carry damaged ammunition magazines. (Note: you DO want to practice with damaged magazines; it teaches you to expect the unexpected.) Take a white Sharpie and write P1 and P2 (P3, P4, etc.) on the bottom of your practice mags. Only use these mags for practice.

Buy the best possible ammunition magazines you can for carry. Mark them C1 and C2 (C3, C4, etc.) I use factory magazines for all my guns save my 1911s (I use Wilson Combat mags for John Moses Browning’s masterwork). Load your mags carefully and treat them well. Every time you remove a magazine from your pocket or carry system, inspect the mags for damage, lint or any other obstruction.

I recommend unloading and reloading your ammunition magazine on a monthly basis to make sure the springs are working properly. I also recommend that you use your shoot your gun with your carry mags on a monthly basis, dropping the empty carry mags onto a towel or other soft surface. I shoot my carry ammo through my carry mags when I do this; I want to make sure the mags love the ammo, the ammo love the magazines and the gun loves them both. That’s a bit OCD and can get expensive, but I reckon it’s best practice.

Previous article: WV Poll: Constitutional Carry, Guess Which One Is Winning: Yes or No Next article: Florida Comes Closer To Concealed Carry On Campus