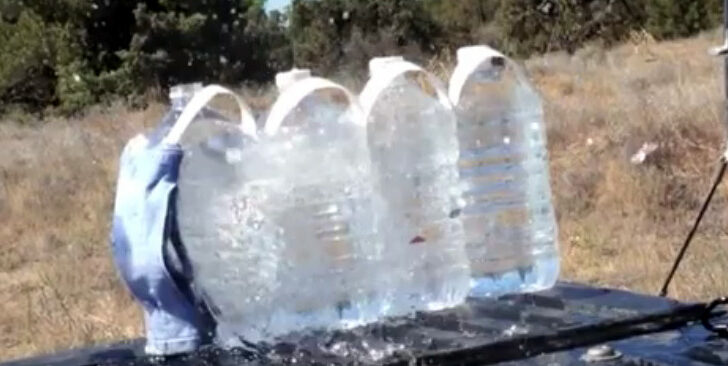 When a bullet strikes a living thing, it creates a pathway for blood and bodily fluid to flow out.  That’s what inevitably causes death – outside of direct hits to the brain, heart, or other vital organs.  When blood pressure drops below a certain point, the victim loses consciousness.  If blood continues to exit, after a certain point the vital organs fail to function properly and the body perishes.

That wound channel – caused by one or multiple rounds – determines the rate of flow of fluid.  That’s why you’ll see a surveillance video of someone being shot and continuing to fight or flee.  The instantaneous response of the body to trauma is to pump adrenaline into the system.  This promotes rapid “fight or flight” response.

This adrenaline jump lasts for an indeterminate amount of time depending on the trajectory of the bullet.  As surprising as it may sound – it’s possible to shoot a bullet through another human being without striking any major arteries or organs.  It’s also possible to have a bullet pass cleanly through without causing immediate, life-threatening injury.

Why Full Metal Jacket Is Bad For Self-Defense

For self-defense purposes, a full metal jacket has the most likelihood of clean penetration.  Taking a direct round to the heart, lungs, brain, or spinal cord are all immediate life-threatening injuries.  But hitting the spleen or intestines – a common thing in center mass shots – does not necessarily mean the target will be down and incapacitated.  An active target is a dangerous target.

Hollow points are defined as bullets with a front-side cavity which promotes expansion upon impact.  The level of that expansion depends upon what it interacts with.  If the bullet strikes nothing but soft tissue, the bullet may expand little.  If it runs into resistance – such as muscle tissue, organs, or bone – the bullet tends to “mushroom” out, creating an even more tenacious and deadly wound channel that needs to be treated immediately.

Two alternatives to traditional hollow point (HP) rounds include the Flex Tip (Hornady) and Hydroshok (Federal Premium).  The Flex Tip includes a soft plastic material inside the cavity of the hollow point.  When that flex tip hits resistance, it pushes against the inside of the hollow point and promotes expansion of the round as it travels through soft tissue.

The Hydroshok has a center post which forces the hollow of the bullet to expand.  This creates a devastating wound channel that promotes blood loss.

There are a lot more alternatives to the standard FMJ.  We go into way more depth about different varieties of ammunition in this article.

So, are you best served by loading full metal jacket rounds into your self-defense everyday carry concealed firearm?  That’s ultimately your call.

Displacement is also a factor.  For larger rounds like the .40 S&W or .357 Magnum (or .45 ACP), the size of the round is extremely devastating.  It’s like making a clean thumb print-sized hole through the entirety of a body.  This virtually guarantees at least a chain of arteries are knicked.  Once an artery is opened, it’s short time before the attacker is incapacitated and immobile.

Does This Mean 9mm FMJ Is Useless?

With 9mm, the game changes slightly.  Is a standard 9mm FMJ any less deadly?  No.  There’s no such thing as stopping power.  If you are landing shots center mass, you are virtually guaranteed to hit essential nerves, organs, arteries, and tissues which the attacker absolutely needs to persist his assault.

Heck, it’s possible to hit the femoral artery in the inside of the thigh and have the attacker bleed out in a matter of seconds.

Hitting thick muscle tissue and fat – such as is found in the quads or buttocks area of a person – gives the least likelihood for immediate damage.  Muscle tissue is loaded with capillaries and smaller arteries which will promote blood loss but not always at a rate necessary to stop an attacker outright.  This is why defensive shooters are encouraged to put more than one round into an attacker – it creates multiple opportunities for wound channels.

Think about a bucket of water.  If you shoot one hole in that bucket, water comes out.  If you shoot multiple holes in the bucket, that rate of flow increases exponentially.  The human body holds, on average, 1.2 to 1.5 gallons of blood (for a person of around 180 lbs).  It’s estimated that losing a third (1/3) of one’s total volume of blood is likely fatal.  That is roughly 6.4 cups of blood.  The frequency and size of those perforations will determine the efficacy of those bullets.

In conclusion, you can use ANY bullet you see fit – but the bigger the wound channel, the faster and more effective the results. Remember, your ultimate goal is to stop the threat once all non-lethal avenues have been taken into account.