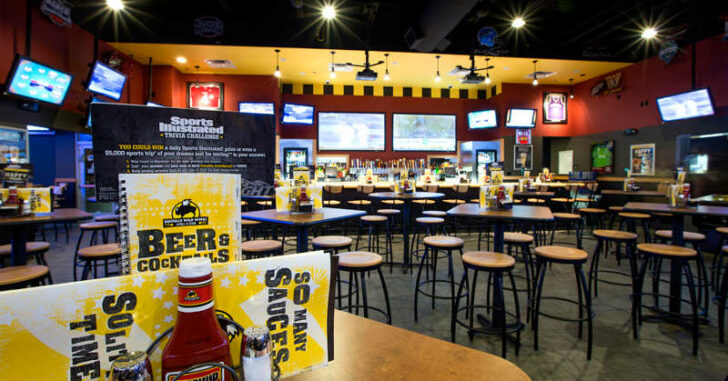 GREENVILLE, NORTH CAROLINA — Buffalo Wild Wings is analogous with a great place to grab a basket of wings and watch the game.  But, unfortunately, not everyone is out to have a good time.  According to the Daily Reflector, a man was shot by an off-duty police officer after pulling a gun and discharging in the direction of that officer.  That man died the next day in the hospital and a current investigation is underway to determine the details surrounding this incident.

What is known was that a fight had broken out in the Buffalo Wild Wings where an off-duty police officer was going to pick up a take-out order.  According to the Daily Reflector, the fight spilled out into the parking lot.  When bystanders recognized the off-duty officer, they asked him to intervene.  He obliged and identified himself to the group of men fighting.  It was at that point one of them is believed to have drawn his pistol and opened fire on the police officer.

The officer responded with deadly force.

The bigger question – why do restaurants still insist on setting up “gun free zones” if there’s absolutely no way of enforcing it or protecting their customers?  Not only do alcohol and firearms never mix – alcohol, firearms, and loose moral fiber doesn’t suit anyone too well, either.

One thing is for sure – at least two people’s nights were completely ruined.  The off-duty police officer was placed on immediate administrative leave pending results from the State Bureau of Investigation and the attacker is presently in the morgue awaiting autopsy.

This seems to be a reoccurring trend we’ve seen the past couple of days.  Criminal wields gun, is confronted by an off-duty officer, decides to act stupid and get himself killed.  The other common thread is that both of these events occurred in a place where firearms aren’t allowed.  Are we seeing a trend, yet?

Buffalo Wild Wings Operations Manager David Floyd said Saturday that “last night’s incident occurred outside of the restaurant, however, due to ongoing police investigation, we are unable to provide detailed comment at this time.”

Buffalo Wild Wings launched a gun ban policy in 2009. It says the business respects the right of individuals to carry firearms. “However, because we are focused on the comfort, safety and enjoyment of all of our guests, we have elected to exercise our right to restrict the carrying of firearms within our restaurants.”

Thankfully, in both the case in Greenville and Tacoma, an off-duty police officer just happened to be by.  In both cases, we’re pretty sure the officers just wanted to go home and enjoy themselves.  We’re thankful for their service.

Previous article: Just Drew Firearm On Someone, Let's Analyze The Situation Next article: This Guy Has A Problem With Concealed Carry, But Supports Your 2nd Amendment. His Reasoning? Wait For It...