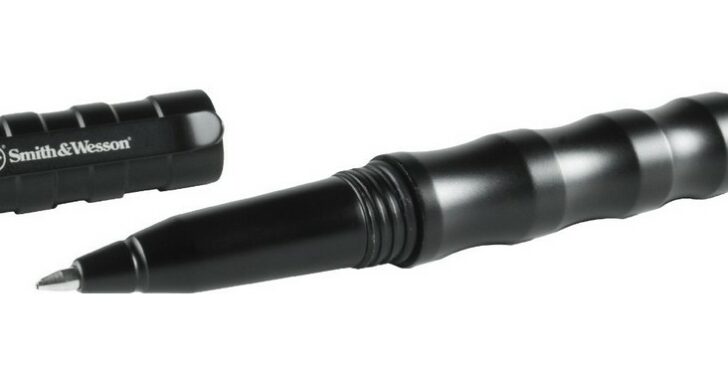 Let’s be real. “Tactical Pen” is a weird name.

Maybe you just got one for Christmas. Maybe you think it could possibly serve you as a self defense tool. Maybe you heard someone make reference to one and wondered What the hell is that?

Whatever your reasons, it’s time you learned exactly what the hell a tactical pen is.

Generally heavier and occasionally larger than their vanilla counterparts, the tactical pen is frequently constructed out of aluminum, steel, or titanium.

Many market themselves with a multi-tool. Every single one I’ve seen to date includes some sort of glass-breaker, and more than one also offers some sort of stylus.

Plus. They can write.

As The Atomic Bear puts it, “think of it as a pen that can hit really hard without hurting yourself and without breaking the pen.”

You might think that a tactical pen is another gambit to stick the work “tactical” in front of a product in order to sell more of it. See, tactical pillow shams.

But is it a gimmick, really?

“In the hands of a competent practitioner, a tactical pen can be used to distract, deter, delay and even stop a violent physical assault,” Shooting Illustrated wrote.

“Unlike your firearm or a folding knife, it is a low-profile, personal-safety option for your toolkit that can be used to help mitigate an active threat.”

The Home Security Superstore points out that a tactical pen can be less conspicuous and requires less training.

They also claim that the tactical pen is a less-than-lethal weapon.

A tactical pen used correctly can certainly be damaging, but it can also be used very effectively for creating only pain and gaining the momentary advantage needed to overcome the attack or escape. The tactical pen can be considered a less-than-lethal weapon because striking someone is unlikely to permanently injure or kill someone in most cases.

That’s a big claim to make, and Concealed Nation is not going to say that will hold up in court, but the sentiment seems to be there on paper, at least.

Plus, again. It can write.

If not, your legally-carried EDC handgun is probably going to be your better option, even if it can’t put ink on paper.