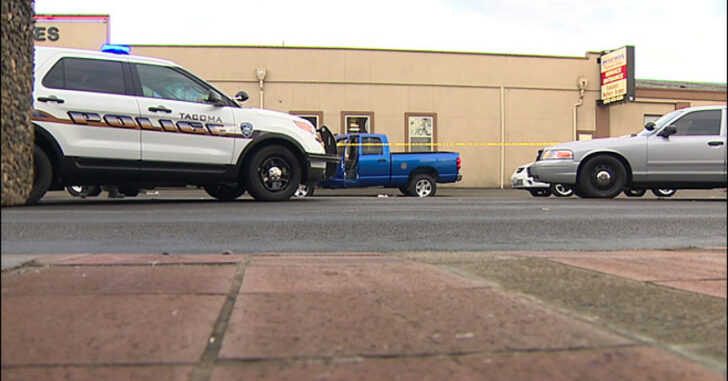 TACOMA, WASHINGTON — At 5:30 pm, Reverend Abigail Vizcarra Perez was finishing up working on her Sunday sermon in a local Starbucks when she heard a woman scream outside.  Her and a few others quickly rushed to the woman’s aid and encountered a man robbing her.  The man, seeing they outnumbered him, drew his firearm.

“The young lady was crying and so a few of us tried to make sure that she was ok,” [Reverend Perez] said.

Several good Samaritans stepped in to help the robbery victim, at which point the suspect pulled a gun, Cool said.

It was right at this moment that an off-duty Tacoma police officer happened to be right outside.

Pulling his pistol, the officer took up position and requested the armed robber drop his firearm.  The armed robber did not comply and the off-duty officer, not in uniform, fired one shot – critically wounding the suspect.

The armed robber fled the scene and jumped into a blue truck.  News reports from KOMO say he made it maybe another 200 yards before crashing.  Likely the adrenaline rushing through him ran out around the same time his blood pressure precipitously dropped from the gunshot wound.  He was rushed to a local hospital where he later died.