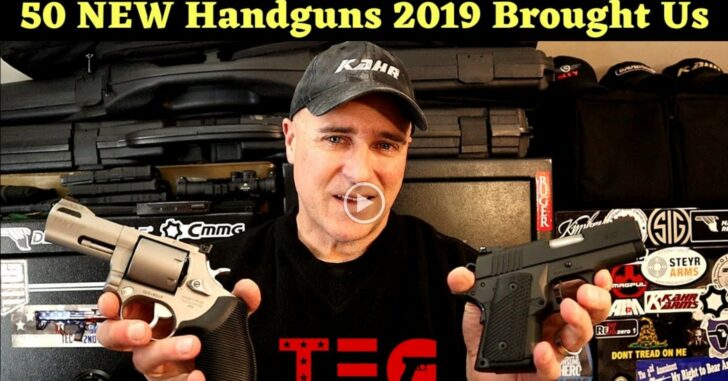 Every year, the firearm market gets flooded with newly released handguns. Each handgun manufacturer attempts to create a new model that drives media attention and shooter’s interests. Many handguns induce extreme excitement and others create extreme disappointment. As the whirlwind of emotions surround the handgun market, one thing is certain, the same thing will happen again next year. It’s just the way it goes.

In 2019, the handgun market was no different. From the beginning of the year, until the end, new handguns were introduced, reviewed and released into the market for sale. Many shooters call this the “Golden Age” for guns. Not only are their more than we can wrap our heads around but they are quality built with fine materials and excellent features. Everything from full-size semi-auto competition pistols to small snub-nose revolvers, 2019 delivered.

Scroll down for video.

I’ve had the pleasure of reviewing 47 of the new handguns that were released this past year. For the most part, they were amazing handguns. As the larger and more popular manufacturers like Glock, Ruger and Sig Sauer get the “lion’s share” of attention, a new company called Naroh Arms created their N1 pistol and Mossberg produced their first handgun in over 100 years. Colt even expanded their traditional “snake gun” line by introducing and releasing the Colt King Cobra Target model. It is fair to say the handgun market in 2019 lacked nothing.

In the video attached, I featured 50 new handguns that 2019 brought us in approximately nine minutes. Out of the 50 handguns showcased, I personally held and reviewed 47 of them. The new Glock 44 in .22 LR, Ruger’s custom shop 1911 and the IWI Masada were the models I did not personally experience.

Check it out and let us know which of the 50 new handguns are your favorites and which models you plan to get for yourself.

Previous article: Man Shot Twice By Gas Station Clerk After Attacking Him With A Bottle Next article: EAA Corp Has A Selection You'll Want To See