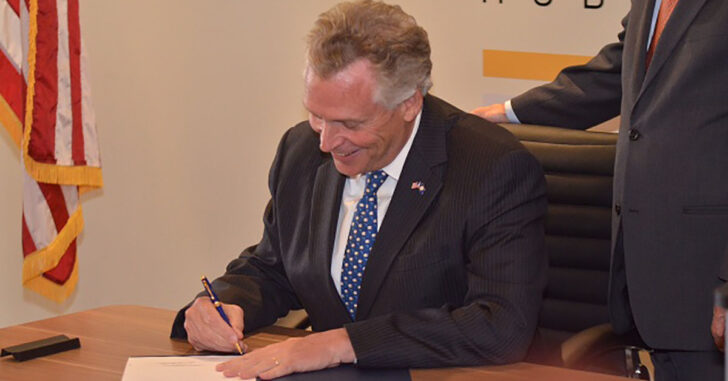 RICHMOND, VIRGINIA — Today, Virignia Governor Terry McAuliffe signed into law a new reciprocity agreement after quite a public fiasco that happened over the past few months.

Concealed carriers in Virginia and around the country collectively let out a sigh of relief when Democratic Governor Terry McAuliffe agreed to a Republican-backed measure to ensure concealed carry reciprocity with the majority of other states.  There was a serious scare a little while back when the Attorney General decided to take drastic measures to reduce reciprocity with neighboring states like Tennessee.  This resulted in a huge débâcle for cities like Bristol, which lie on the border.  For concealed carriers driving through Virginia, it was also an incredible burden.

Thankfully, it looks like this political quagmire is over.  As the Washington Post reports, the governor and legislators all seem peachy-keen on the new deal set to take effect on July 1st.

“This is a bipartisan deal that will make Virginians safer,” McAuliffe spokesman Brian Coy said. “It also demonstrates that Democrats and Republicans can work together on key issues like keeping guns out of dangerous hands.”

Attorney General Mark R. Herring’s decision last month effectively gutted Virginia concealed carry reciprocity.  When we first covered it, we were a bit flabbergasted that pundits were calling the move “purely political maneuvering” when there are real people caught in the proverbial cross-hairs.  For instance, if you lived in Tennessee and lived the majority of your time as a concealed carrier with reciprocity with Virginia, you’re now in hot water if you step over the border on a routine grocery run.

While we’re really glad that Virginia has decided to counteract some rather dangerous and unpleasant changes in their reciprocity agreements, it’s still a painful “win”.  What guarantees do we have that the governor of Virginia won’t decide to hold us all hostage again?  Why does this feel like we’re negotiating with a supervillian instead of a theoretically democratically elected leader?

Well, there were apparently a few trade-offs.  For one, any Virginian resident under a two-year protective custody order for domestic violence can be legally stripped of his or her firearms.  The second part just means that the Virginia State Police will be represented at every gun show to provide background checks upon request.

The second one really doesn’t seem like a bad idea.  The first one is a little icky because it basically places the state in the role of confiscating another person’s property.  But, they also negotiated around that part, too, because once someone gets issued a two-year protective order for domestic violence, Virginia law will now require him to sell or dispose of his gun collection within 24 hours.

All said and done, I’d rather be able to carry legally in Virginia than have to treat Virginia like I do Maryland — with my handgun unloaded and locked in the trunk of my car.

The Governor’s Office released the following statement today, regarding the new law:

Governor Terry McAuliffe today finalized a historic bipartisan agreement to make Virginia safer by signing three key pieces of legislation into law. Joined by First Lady Dorothy McAuliffe, Democratic and Republican legislators, law enforcement officials, Virginia prosecutors and domestic violence prevention advocates at a signing ceremony in the Virginia Executive Mansion, the Governor thanked the leaders who worked with him and his team to make this agreement a reality.

“The historic bipartisan agreement will make Virginia safer by keeping guns out of the hands of domestic abusers and people who cannot pass background checks,” said Governor McAuliffe. “Virginians elect their leaders to work together to get things done, and today I am proud to say we did just that. This is the most significant step forward on gun safety in 24 years, and I look forward to continuing to work with the General Assembly and the public safety community to build on the progress we made this session.”

The three bills signed by Governor McAuliffe were part of a bipartisan agreement with the General Assembly to pass legislation requiring any person who is subject to a permanent protective order for family abuse to relinquish his or her guns within 24 hours or face a Class 6 felony. The bill, which had been defeated for many years in the General Assembly, will give Virginia one of the strongest laws in the nation with regard to taking guns away from domestic abusers.

“Governor McAuliffe’s action today will unequivocally improve public safety in the Commonwealth and save lives,” said Secretary of Public Safety and Homeland Security Brian Moran. “The law signed today will be the toughest in the country on permanent protective orders for family abuse.”

“This bipartisan agreement is a major step toward securing the Second Amendment rights of Virginia’s most law-abiding citizens,” said House Speaker William J. Howell. “I am also proud of the steps we are taking on public safety. I want to thank Governor McAuliffe for signing this legislation, and I thank Secretary Moran, Delegate Gilbert, Delegate Lingamfelter, Delegate Webert, and Senator Reeves for their hard work to make this agreement a reality.”

Senator Bryce Reeves added, “Today’s bill signing culminates a month of bipartisan work and good governance on behalf of all Virginians. The bills signed today protect Virginians’ constitutional rights and make our Commonwealth safer. I am proud to have carried Senate Bill 610 this year, protecting the rights of 421,000 law-abiding Virginians who hold concealed carry permits. I am glad to have the Governor’s support on this measure with his signature today.”

“I want to commend Governor McAuliffe and the bipartisan coalition of legislators who came together around an agreement that will make Virginia a safer place to live,” said Senator Janet Howell. “No compromise is perfect, but these three bills will save lives by keeping guns out of the hands of domestic abusers and people who can’t pass background checks. I am proud to have worked with the Governor and my colleagues from both chambers and both parties to make the most significant steps forward on gun safety in Virginia in decades.”