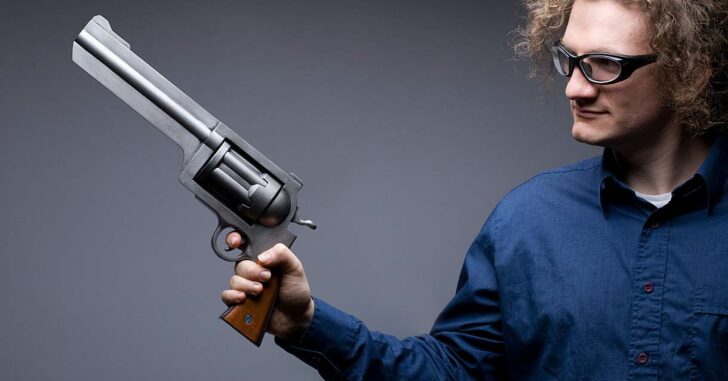 This is a guest post written by Dieter Heren, owner of saltwaterandgunpowder.com, a website devoted to hunting, shooting, and fishing.

There’s a tendency among gun owners to go for the gun that makes the biggest boom and shoots the biggest bullet. While these guns are certainly fun, they aren’t always the best choice when you’re looking for a gun to carry concealed.

Several problems arise when someone tries to carry a large handgun in a concealed fashion. First, the issue of size. Realistically, there are only a couple of places where a person can hide a gun on their person. Most of you are familiar with these spots, IWB (inside the waistband), OWB (outside the waistband), in a pocket, or on your ankle. Even just standing in front of a mirror, it’s nearly impossible for the majority of people to completely hide a large gun such as a full size 1911, forget about trying to go about your daily business.

The next problem that comes about when you try to carry a larger handgun is the issue of quickly drawing in the event you’re forced to use the gun. Bigger means slower, and in a life-threatening encounter every millisecond counts. You may only be a half second slower drawing a larger gun, but that can be the difference between surviving a violent crime and becoming a statistic. Along with being slower, a longer barrel is more likely to get hung up on loose clothing or your holster. In a life or death situation, your adrenaline will soar and you’re going to be ripping that gun out as fast as you can. It’s point A to point B.

The third major issue that arises when concealed carrying a larger handgun is accurate follow up shots. A gun with high recoil can cause quite a few problems. Even carrying a .45acp, you are likely to require multiple follow up shots to completely stop the encounter. It doesn’t matter how many rounds your magazine will hold if you’re only accurate with your first shot.

Remember, the gun you carry isn’t going to be shot under range conditions. You won’t have time to set your feet, slowly line up the sights, and squeeze the trigger. Once you make the decision to fire, you are going to put as many rounds into your aggressor as quickly as you can to put a stop to the attack. You don’t have the time to line up follow up shots. If the recoil of the gun pulls your barrel off target, not only does this prevent you from putting more rounds into your attacker, it also endangers any innocent bystanders who may be nearby, something you are very responsible for.

When it comes to choosing a gun that you are going to carry on your person day in and day out, a compromise is necessary. There’s a reason the military goes out with an assortment of deadly weapons, as opposed to the police whose only deadly weapon is likely a handgun. Why is this? The military expects to be in large firefights day in and day out, the police rarely, if ever, need to use their handgun. The police could go out armed like the military, but this would interfere with their other duties, so they compromise. The same concept applies to civilians who choose to carry concealed.

Realistically, the vast majority of you who read this will never be in a situation where the use of deadly force is necessary. But the threat is there. So we need to compromise. Choose a handgun that you can carry comfortably while going about your daily business, that you can quickly put on target, and you can accurately rapid fire multiple rounds with. The gun that works best for one person could be totally wrong for the next. Find what works for you. Remember, a .22 in your pocket is a hell of a lot better than a .45 in the safe.

Originally from the state of Michigan, I came down to Florida to attend Florida State University and have been living here ever since. I enjoy all things hunting, fishing, and shooting and decided I wanted to share everything I’ve learned over the years to help out all of those who live in and visit Florida. When I’m not working on my personal site, I can be found in the woods hunting deer and hogs or out on the water chasing pelagics. I carry concealed and opt for a Remington 1911 loaded with Remington Ultimate Defense 230gr. BJHP in .45acp. My enjoyment for responsible and safe concealed carry brought me to this site.

View all posts by Dieter Heren

Previous article: Are School Shootings really "Becoming the Norm"? Next article: A Florida man calls 911 during a violent home invasion is transferred to voice mail, decides to take matters into his own hands