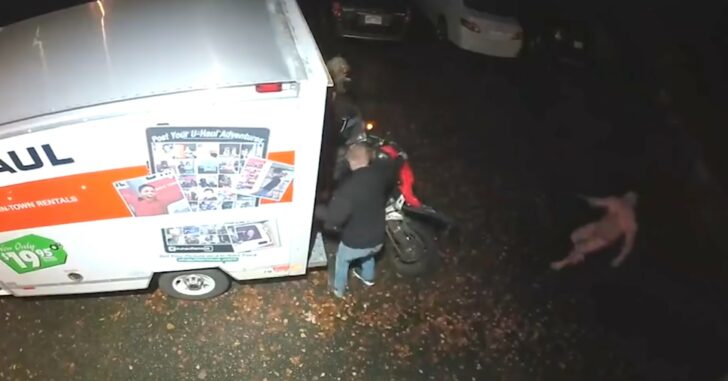 All three of these robbery attempts are pretty wild, as you’ll see in the video below. Defending property can be a tricky thing, with some not wanting to introduce themselves into a situation where they could get injured or killed by the robbers.

The truth is that you aren’t going to know if the bad guys are going to cause you any harm, or if they’re simply going to run off when confronted. In these cases below, each and every one, the bad guys high-tail it out of there, but not before having their vehicles significantly damaged by the nearly nude defender.

This part of the videos, where the defender takes out some aggression on the suspect’s vehicles, is something that could land you in hot water. I get why he did it, but it also brought him much closer to the bad guys and for all he knew, they could have been armed.

It’s just a risk I’m not personally willing to take, regardless of how angry I may be.

I tend to be on the side of; don’t defend property as it’s not worth possibly losing your life over. It would seem that this guy knows how to handle things for the most part and he’s clearly made the decision long ago to defend his property, but it’s still risky business.

Also consider the fact that many bad guys are gang members and if you chase them off and bust out the windows of their car, you may be facing retaliation down the road. The bad guys do sometimes come back, and they’re looking for revenge.

Finally, I think it’s time for this guy to contemplate a move to a better location.

Previous article: No Charges For Ride-Share Driver Who Shot Man After He Hit Her And His Girlfriend; Police Next article: GRAPHIC WARNING: Woman Sexually Assaulted By Man While Walking Down NYC Street