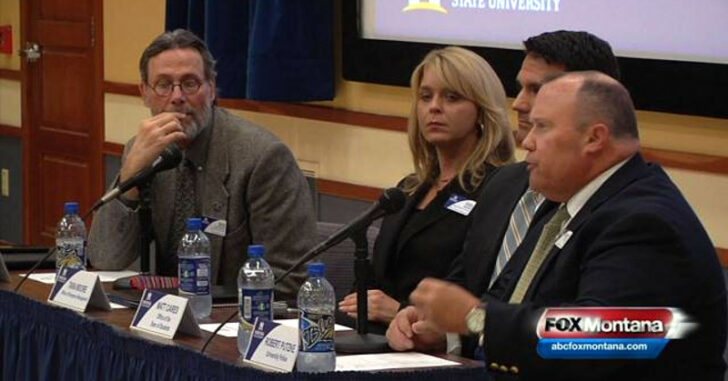 BOZEMAN, MONTANA — Students and faculty arrived to a Montana State University presentation on emergency preparedness for an active shooter scenario delivered by the MSU chief of police and others.  What the police chief and presenters weren’t expecting was a debate — apparently something that is sorely needed and poorly tried in a university setting.

“While police are only minutes away, saving your life depends on what you do between when the shooting starts and when we arrive,” said MSU Police Chief Robert Putzke.

Makes sense.  We hear that phrase used often in the 2A community.  “When police are minutes away, life is measured in seconds.”  That is a core reason so many people carry a concealed firearm.

That makes it all the more weird because Montana State University does not currently allow faculty or students to carry concealed.  As students and faculty gathered and watched video and audio of an active shooter, one student had the guts to get up and ask the important questions.

“Why are we not allowed to have the same tools that the police are having to stop this shooter?” said MSU student Luke Wilkins. Wilkins says he has his conceal and carry permit and wants to be able to use it at school.

The chief of police proverbially shot down any such discussion, stating that the presentation was meant to inform faculty and students as to the preparedness of the university to handle an active shooter to the likes of what has been seen in recent shootings such as Oregon and other places.

One university faculty member, Professor Gary Bishop, went so far as to say, “Well, I just felt that this was not a forum to discuss conceal and carry.”

Wait — what?!  You’re expecting students and faculty members in a higher education institution to not discuss existing policy with the intent of making it better?  What’s the point of higher education if something as simple as critical thinking is dissuaded?

It makes perfect sense.  Concealed carry on campus doesn’t increase or decrease the chances of an active shooter on campus.  It does even the playing field.  This was a missed opportunity to have an actual discussion versus demonstrating the inherent flaws in the system.  And that’s what presentations like this do when concealed carry is left out — “wait for us to save you.”

That’s a show of how much MSU must value its faculty and its student body.  It’s unfortunate.  And thankfully, students like Luke Wilkins and hopefully others will bring such issues increasingly to the forefront.