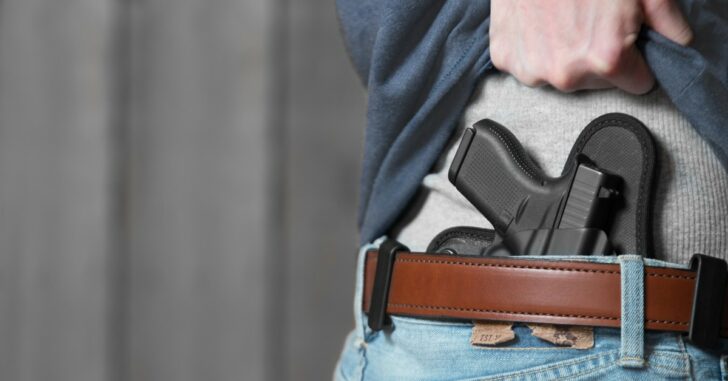 I’m talking about outside of your home. It doesn’t count if you were practice-carrying inside, although we do recommend this before going out into the real world.

For most, carrying their firearm in public for the first time is something that they remember, mainly because it can come with so many unknowns.

I remember the first time I carried in public, and I had a few places to stop that day. At the time, I was using a pretty generic kydex holster that I got on Ebay. This is a route that many newbies take, and many quickly realize that they’re going to want to upgrade to a better and more comfortable holster.

Regardless, there I was with my Ruger SR9c and a kydex holster. I was admittedly nervous of a few things the first time out:

These were all legitimate concerns that I had as a public carry virgin.

My first stop was to a pizza place that a buddy of mine owns. It’s a place that I would frequent, so it was a more ‘comfortable’ place for me to help me get my legs.

I remember walking inside and greeting everyone as usual, and I ordered two slices of pizza and a soda. Up at the window facing outside, there was a bar of sorts so that people could sit down and eat and/or wait for their food. I sit down immediately and start to freak out.

Laugh all you want, but this was my thought process.

So what did I do? I stood up and waited while leaning up against the wall with my holster side facing the wall. There. No one would ever know.

As funny as it sounds, this is an experience that many people go through when carrying for the first time. It’s not a time to laugh or joke about, but rather it’s a time to let people know that they aren’t alone. It’s also a time to remind folks to get as familiar with your firearm and holster as much as possible while at home. You have all the time in the world to try different sitting positions, situations, clothing, you name it.

It’s during this time that you should be addressing your concerns, instead of when you’re out in public and likely making yourself stick out like a sore thumb.

After this stop, I headed to CVS to pick up a prescription and get some BOGO Oreo’s. Why do I remember the Oreo’s? Because I had to bend down to get the ones I wanted. It dawned on me quickly that I had to bend at the knees and not at the waist like I’ve done all my life when reaching for something on a lower shelf. It felt silly at first, like I was a caveman ready to make a number 2, but I realized that this would be a new part of my daily routine and I was alright with it.

So, that was my first carry in public experience. Now, of course, I’m a pro. I can easily wear shorts and a t-shirt without anyone knowing what’s going on underneath.

What about you? I’d love to hear some other ‘first time carrying in public’ stories!