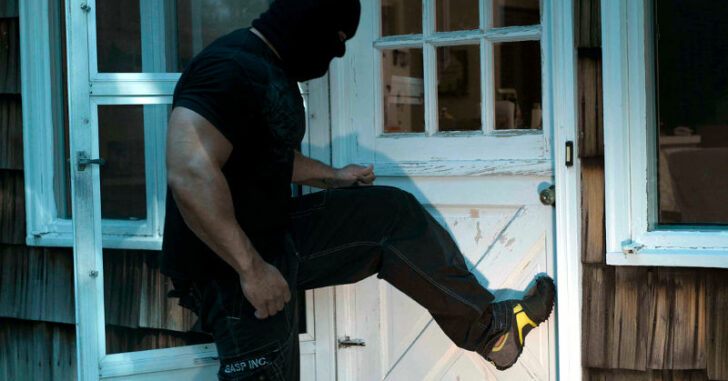 Many of us look forward to settling down after a nice, long day at work.  It’s natural, reflexive nature to just unbuckle the belt, unclip the holster and put the gun away.  Especially for those folks out there looking forward to the embrace of their children or significant other – home is the place we relax.  It’s the place where we settle down for the evening.

Unfortunately, there’s plenty of people hoping that’s the case, too.

According to one study funded by the City of Houston, Texas, the majority of home burglaries and invasions occur during daytime hours.  Specifically, 7 am – 2 pm.

*Time of Day (TOD) analysis by several other police departments for major metropolitan areas have also been conducted but unfortunately, the FBI does not publish specific statistics on reported TOD – just numbers of incidences, location, etc.

A lot of Americans aren’t home during those working hours.  We’re out working.  Our kids are normally in school.  We’re not home.  So, for a burglar, who is characterized broadly as a male, 25 years or less, and statistically living within 2 miles of the place he intends to rob, the time of least resistance is during those hours.

Another astonishing statistic is that most of the burglars live in close proximity and are even familiar with the residence prior to committing the home invasion.

So, unfortunately, the person robbing your house is statistically likely to be somewhat familiar with your daily routines and patterns.

What’s a good conclusion for this?  Just because you’re home doesn’t mean you should stop carrying your concealed firearm.

Commitment To Everyday Carry Whenever Possible

We’ve covered a number of home invasion stories in the course of trying to educate the 2A community on the merits of carrying both inside and outside the house.  The house is where we are most vulnerable because when we get home – we relax.  And relaxation is good!  Human beings need to be able to let their guard down and relax.

That’s why having a concealed carry firearm on you while you’re at home is potentially one of the best prepared defenses you can have.

Let’s take three recent examples from stories we covered to illustrate how the home can quickly – an unpredictably – turn into a combat environment.

Our job, as protectors of our home and family, is to keep that place safe.  Home defense is an all-hands-on-deck affair.  Everyone has to be prepared to act if necessary.  Your significant other can be your greatest asset — as we found out earlier this year when an elderly man was able to stop his wife from being beaten by home invaders by faking sickness to get to his pistol.

For those living alone, it’s even more crucial you’re willing and able to defend yourself at all times.  Nothing in this life is guaranteed outside birth, death, and taxes.  The rest, my friends, is up to us — carry your pistol in the home as well as outside of it.