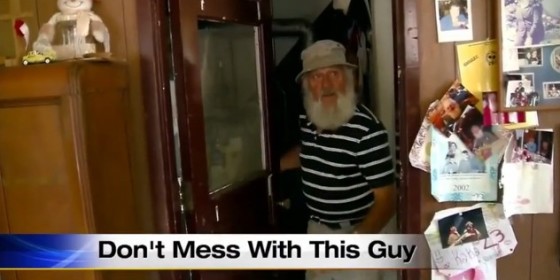 REDFORD TOWNSHIP, MICHIGAN — Ron Henrick, a 79-year-old retiree, enjoys working as a clown and as Santa Clause every December.

Friday morning, he found a new person to put on the naughty list … and it’s one of his own neighbors.

Henrick awoke to a noise and went to investigate with his 12-gauge shotgun. His findings: one of his neighbors was trying to walk out with his TV.

Henrick had his gun, and the neighbor picked up a stationary bike to use as a weapon.

“When he was coming at me, I was coming at him with the gun. He grabbed (the bike) and threw it at me and I (closed the door) and it tore up everything. Lucky I did that, because it probably would’ve killed me,” he said.

After the ordeal, the neighbor left the home.

In Henrick’s 30 years as a resident in the same location, this is the first time he’s ever had any sort of problem there.

The neighbor, currently in jail, has been tied to another home invasion on the same street where he stole a TV. Long story short, neighbors want him gone.