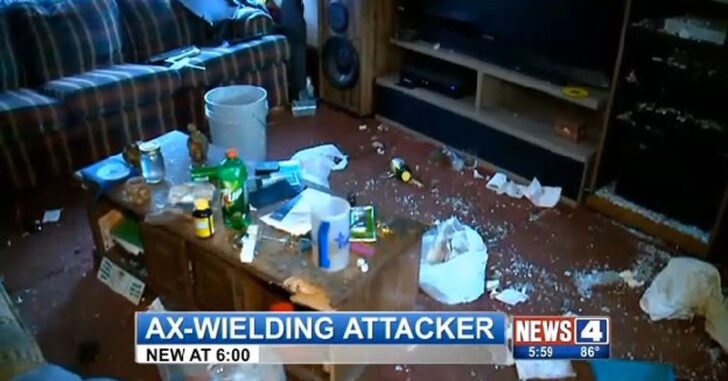 FRANKLIN COUNTY, MISSOURI — A homeowner came face to face with a home intruder and killed him in self-defense. It’s the second time in just four months that the homeowner has been faced with an intruder.

The homeowner, Mike Weiners, says that a man barged into his home wielding an ax and began demanding money, breaking objects in the home and demanded a ride to Arkansas.

The intruder turns out to be an old neighbor of Weiners, named Eric Frazer.

“He said ‘I will kill you, I’m going to kill you,” Weiners said.

That’s when Weiners says Frazer started to go after him.

“He says ‘I think I’m going to chop your feet off,’ and I’m like ‘what?’ So he whacks and it hits the table and busts the table up. He barely missed my feet,” Weiners said.

Once an attack was apparent, Weiners acted in self-defense by stabbing Frazer. That sent Frazer out the door and into Weiners truck, taking off with it.

Weiners called police, and they found Frazer shortly after slumped over the steering wheel of Weiners truck. He was taken to the hospital and pronounced dead.

Back in February, Weiners shot and killed a man who broke into his home. The two had apparently had an argument prior to the break-in, and Weiners says he shot the 60-year-old in self-defense after realizing the man was armed.

Previous article: Here Is Why Our Policy Is To Never Publish The Names Or Photos Of Mass Shooters Next article: Magazine Dilemma - Single Stack Or Double Stack?