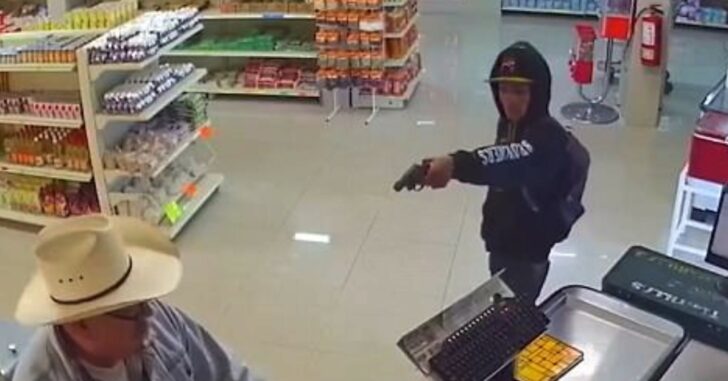 If there’s one thing that we can’t argue with, it’s the sheer will to survive when faced with a dangerous situation. How people handle the situation, though, will vary from person to person.

Some will get as far away as possible. Some will hide and hope that they aren’t hurt or killed.

And others, well… others will grab life by the ***** and dive in head first.

That’s exactly what this man did as he was waiting in line at the register when an armed thug came barging in to rob the place.

As the armed man comes in, he first waves the firearm at the person behind the counter, and then trains it on our cowboy. That was his 2nd mistake. The 1st mistake was being a thug.

The mugger then points the gun at the hero, who is wearing a beige cowboy hat with denim biker coat, before turning away to threaten the shoppers in the store.

But taking his eyes off the cowboy proves to be a costly mistake as the hero takes his chance, rushing the criminal and smashing the revolver out of his hand.

That’s when the cowboy sprung into action, but not before casually taking off his sun glasses. He knew he was about to get into it.

He charges the suspect and manages to get the gun out of his hand and it lands on the floor. Quickly, two employees rush over to help get the guy down. Then, the bad guy brandishes a large kitchen knife, but it’s still no match for the cowboy, who is able to get that away from him as well.

Quickly defeated, the bad guy was held down while another employee called police. Let’s just say that this guy picked the wrong store to rob, and he had to deal with swift justice at the hands of a few citizens who weren’t going to put up with his crap.