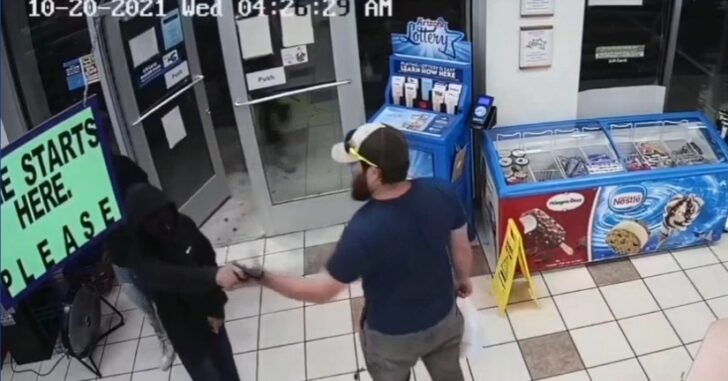 Early Wednesday morning, three individuals attempted to rob a Chevron convenience store in Yuma, Arizona. The first perp walked into the store wielding a gun. What he probably didn’t anticipate was a former Marine standing in line.

When the robber pointed his handgun, the customer deflected the gun with his left hand and punched him with a right cross to the the face. As the gunman fell to the ground, the second perp tripped while attempting to escape. A third masked accomplice, seeing what was happening, never made it into the building.

The Marine detained the armed robber until law enforcement arrived at the scene. The gunman was eventually charged with armed robbery and aggravated assault.

The customer told law enforcement he knew how to handle the situation because of his military training. “The Marine Corp[s] taught me not to [mess] around,” according to ABC-15.

The two other accomplices remain at large.

Lesson of the day: good guys don’t always have to use a firearm to stop a bad guy with a gun, though it certainly helps. This was an example of the right person being at the right place – depending on how you look at the situation – at the right time. And I’m sure the convenience store clerk is grateful this Marine was there.

By Beth Baumann via TTAG and republished with permission.