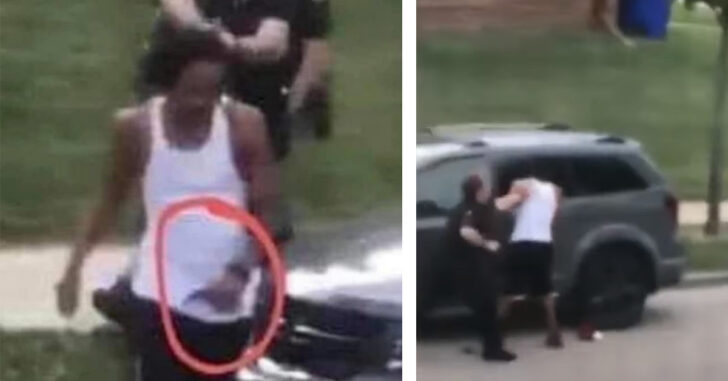 Jacob Blake was shot multiple times by police in Kenosha, Wisconsin on Sunday, after they say he was holding a knife and refused to drop it. News reports say that Blake was in a confrontation with a few other people, but the extent of the confrontation is not known.

Blake had an outstanding warrant in regards to sexual assault and domestic abuse charges. Police were apparently informed of this while enroute to his location.

A video, which has been seen by millions, shows Blake walking away from officers and opening the door of his van. His 3 children were apparently in the van at the time of this incident.

As Blake is walking, a frame from the video shows an object in his hand, which could be a knife. This, coupled with reports that police repeatedly told Blake to drop the knife, could indicate that the object in his hand is indeed a knife.

The object does resemble a Karambit knife, but truth be told we don’t know what he has in his hand.

A taser was deployed prior to the shooting, but was said to have malfunctioned.

As Blake is opening his door, an officer grabs onto his shirt in an attempt to stop him from entering, likely fearing that he may have a gun inside the vehicle, and/or simply attempting to stop him from leaving.

Shots are then fired, and we count a total of seven.

Blake is currently fighting for his life at the hospital.

With the spread of the video, riots broke out in Kenosha last night, vowing to continue on Monday night as well. Many believe that the officers acted too quickly and used deadly force when it wasn’t necessary.

While all of the details are not yet public, we could attempt to take a look at this incident from an armed citizen standpoint.

If you were in an altercation with a person who had a knife, your main goal should be to distance yourself from that person. If you’re successful, call the police and keep yourself in a safe location. If you’re unsuccessful, this would be grounds for lethal self-defense. If someone is closing in on you with a knife, you don’t have a whole lot of time to react.

But in this case, the person was walking away from you.

If that same person had a knife and then walked to their car while saying that they were going to get a gun, your best option is still to try and get yourself to a safe location and away from that threat. If it happened while you were right next to the car, that could possibly be grounds for lethal self-defense, but you’re in a grey area if you’re not visibly seeing a firearm. If they still have the knife in-hand, but if they’re not threatening you or acting in a threatening manner, there isn’t much of a case there for lethal self-defense. Your best option, again; Get to a safe location.

If the person had no knife or gun and it’s all hearsay, you have no business drawing your firearm. AGAIN, your best option is to get to a safe place.

There are many different factors and scenarios that we could add to this, and the outcomes would vary based on these. Being an officer is different from being an armed citizen, but much of the same rules apply.

Being an officer, especially at a time like this, is an extremely difficult job. Quick decisions need to be made, common sense needs to come out, and knowing what types of force to use in a split-second are extremely important decisions.