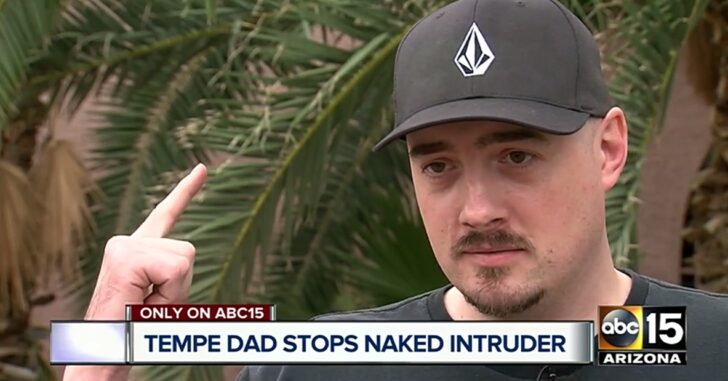 TEMPE, AZ — A man in Tempe, AZ totally ruined one family’s day after breaking into the rear of their home… completely naked.

Although no one was hurt, and the homeowner was armed, the trauma this caused and the story that was made are both pretty incredible. You have to read it to believe it.

Tempe police were called to the area of Scottsdale Road and McKellips Street after a homeowner said a nude man walked into his home uninvited. Tempe police said the naked man was able to crawl over a fence in an alley to gain access to the home. The suspect entered the house though an unlocked door. Two adults and two children under the age of four were all in the home at the time.

The suspect told the family he was “invited” to this particular home and would pay the homeowner in diamonds. After the homeowner, Tyler Piltz, held the suspect at gunpoint and chased him out, the unknown man allegedly found clothes in an alley and put them on before fleeing the area, officials said.

Listen. I like diamonds. Who doesn’t? But I’m not sure that even they are fair compensation for a naked dude waltzing into my house where my family is.

Piltz apparently felt similarly. Piltz has a laser attachment on his handgun, and reportedly held that dot on him until he fled. That’s all that was needed to do the trick.

“You know, if he wouldn’t have left, I know that I wouldn’t have hesitated to shoot him,” he reportedly said, but also noted that he was glad that he didn’t have to pull the trigger.

There’s a story you don’t see every day.

Previous article: Homeowner Holds Burglar At Gunpoint For Free Ride To Jail Next article: A Rare Look Into My Gun Safe & How I Added Space with a Magnetic Gun Mount