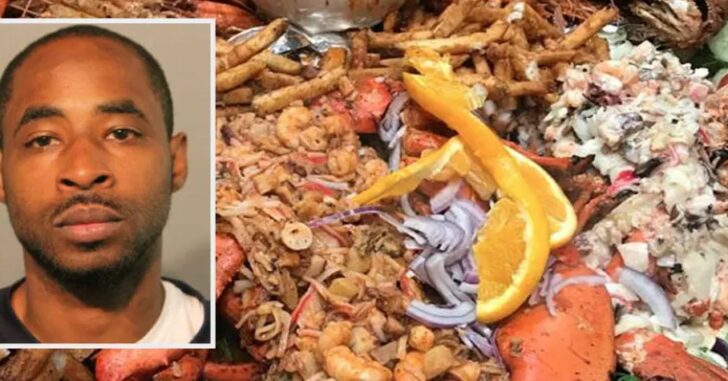 CHICAGO, ILLINOIS – Two visitors to the Windy City were having a great time with friends at a West Town restaurant…until another patron pistol-whipped one of them and robbed the other at gunpoint. Prosecutors say things got out of hand Monday evening on the second floor of Alegrias Seafood, at 1024 North Ashland Avenue.

A group of friends were enjoying dinner when another diner, Claudious Payne, approached and informed them that they were being loud and disrespectful. Payne then took his complaint to a manager, who then spoke to the group. Payne took his family downstairs, then returned to the group upstairs, ordering one of the men to pay his bill. As things escalated, Payne flipped a large tray of seafood onto the man, then lifted his shirt to display a handgun in his waistband. Still not happy, he pulled the gun and hit one of the men in the face.

Another man in the group pulled out his credit card and told Payne to follow him downstairs and he would pay for the family’s meal. At the register, the man raised his hands and told the cashier that he wanted to pay Payne’s bill, during which Payne pushed him from behind.

Frantic 911 callers summoned police, who found Payne about a block away from the restaurant, without a gun. He was charged with aggravated battery with a deadly weapon, attempted robbery while armed with a firearm, and two counts of aggravated unlawful use of a weapon. His bond was set at $250,000 and an additional $5,000 for violating terms of a pending theft case.

Payne has seven felony retail theft convictions in his past. Commenting on Payne’s case, his attorney said that he is a father of six, and that the recent allegations are “completely out of character…I’m sure there’s more to the story”. According to prosecutors, nearly every detail of the incident was captured on surveillance video inside the restaurant.

Previous article: Man Shot In The Head After Kicking In Woman's Front Door, While On His Way To Anger Management Class Next article: 6th Grade Girl Shoots 3 At Middle School, Police Searching For Motive And Source Of Firearm