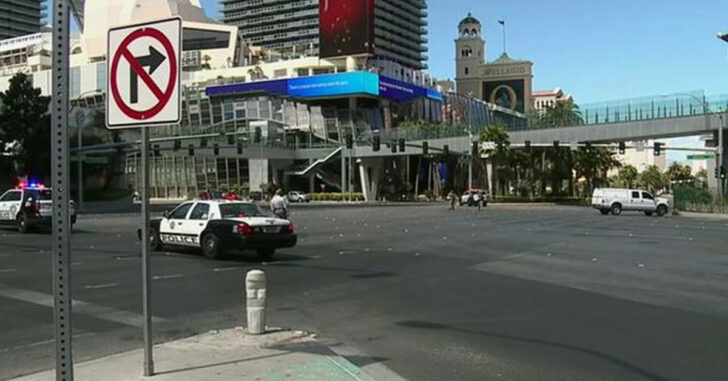 LAS VEGAS, NEVADA — Earlier today, a man with a gun shot two people, leaving one dead at the scene right outside the Cosmopolitan hotel and casino. By 1:23 p.m., Las Vegas police had cordoned off the area of the strip and stood watch around a bus that the suspect holed up in. Through a tense negotiation, the suspect gave himself up without further incident by 3:30 p.m.

Las Vegas police took to their twitter account to issue public notices that the strip was closed and they recommended all those in the area shelter in place.

According to Las Vegas Eyewitness News 7, the other victim in this incident is listed in fair condition.

This is just a reminder that violence can spring up just about anywhere for any reason. The motivations of the attacker are not known nor will we identify him here due to our standing policy of not giving a name to someone who carries out public shootings of innocent bystanders.

While the State of Nevada has some of the most permissive gun laws for registered concealed carriers, many parts of the strip forbid anyone except from law enforcement and security from carrying guns into and around hotels and casinos.

I recently took a trip to Las Vegas back in October to review the Springfield Armory the SAINT. Because Nevada doesn’t acknowledge my right to carry with my current permit, I left my concealed handgun at home. And even if Nevada DID allow me to carry, I would have probably still left my gun at home because the hotel I was staying at was on the strip and they didn’t allow firearms in the building.

Just because we don’t have a gun on us doesn’t mean we can’t still use situational awareness to our advantage. There’s not much any of us can do — especially while unarmed — if some madman decides to start cutting people down in broad daylight. Our basic options are to take cover, get to a place where we can barricade or lock the doors, and wait for police to arrive.

Las Vegas police are very fast to respond to disturbances on the strip. There was a bit of confusion because the same day as the bus incident, armed burglars sacked a Rolex store in the Bellagio. Police now allege there is no connection between those two events.

Previous article: [FIREARM REVIEW] Kimber Micro 9 CDP Next article: Negligent Discharge - How I Put a Bullet in the Ceiling