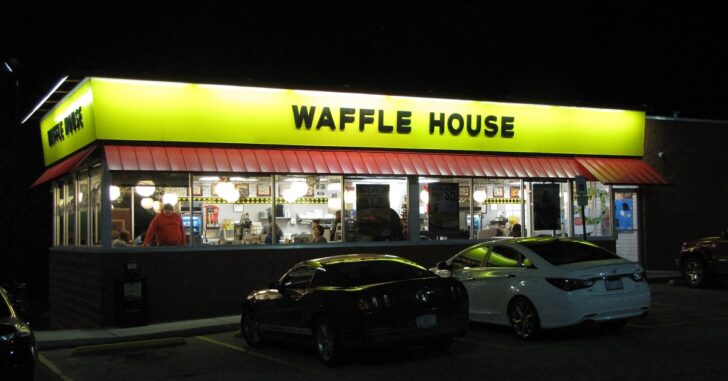 CONWAY, SOUTH CAROLINA — A Waffle House Employee successfully ran off two attackers after they attacked him in the restaurant and eventually opener fire at him, police reported.

After what sounds an awful lot like a gun battle, the unnamed employee made a bizarre statement regarding the fate of the two alleged attackers.

Even if they were caught, the employee stated that he would not pursue charges against them, the police said according to Fox News.

Police said that they were told the unnamed employee was working behind the counter when two men ran into the store.

One allegedly hopped behind the counter and began “punching the worker in the head and pushed him into objects,” according to the report.

The other stood by with a gun.

Afterward, the two reportedly left, but the attacked employee grabbed a firearm and pursued them, at which time the attackers opened fire. The employee returned fire and eventually returned to the restaurant.

Police reportedly arrived to find a damaged restaurant with multiple casings and bullets for collection.

Fox reported that no charges were being pursued against the two suspects.

Those are the reported facts. Here’s my conjecture:

It seems very possible that, in this case, the victim knew the two attackers, even if Fox did not report it. It may be that this came from a previous dispute or disagreement.

That’s the only way I know to account for the desire not to charge two guys who were very nearly murderers.

But, who knows? Maybe the most forgiving man alive works at a Waffle House.

Previous article: What Is Constitutional Carry? Next article: Man Already Wanted For Parole Allegedly Breaks Into Home, Shot By Homeowner