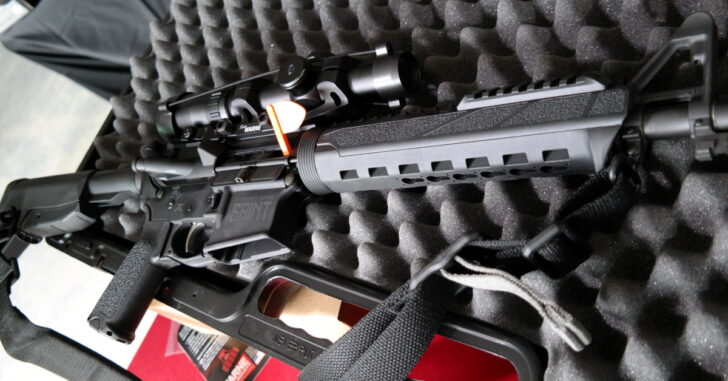 Walk into your average gun shop in America and you will see a minimum of at least one full rack dedicated to the AR-15 platform. The AR-15 is a semiautomatic rifle that typically fires a 5.56mm NATO round in a detachable magazine. Lightweight, ergonomic, and efficient — everything red-blooded Americans tend to enjoy. So when Springfield Armory announced they were releasing the SAINT, my first question was…

What Makes The SAINT By Springfield Armory Stand Out?

In October, a group of sixteen gun writers were invited to test fire it. Each of us was given two SAINTS to experiment with. One was configured for long distance and another for short-to-medium distances. We would be allowed to test each SAINT out in a number of different capacities at the Pro Gun Club outside Las Vegas, Nevada. I can safely say that the SAINT stands in a class of its own.

The first one was equipped with a Bushnell Elite 6500 2.5-16x 42mm scope. That scope costs almost as much as the rifle.

The second one was configured for more CQB (close quarters battle) and medium distance engagements. It was fitted with a Trijicon MRO. This MRO was attached atop the upper receiver. It only cost half as much as the rifle.

This was done to give us an idea, as we ran through our testing, of the capabilities of this SAINT AR-15 when equipped with premium sights.

For the writers who went on to test the long range capabilities, they will likely have their own opinions. As a concealed carry writer, I wanted to focus on short-to-medium ranges and maneuverability.

The Nitty-Gritty Details About The SAINT

Springfield Armory’s the SAINT AR-15 is chambered in 5.56 mm and accepts a standard 30-round magazine or a MAGPUL-style magazine. The barrel has a 1/8 turn and it comes with a picatinny rail on the top rail of the hand-guard as well as the upper receiver.

Because Springfield Armory realized a lot of customers would never use iron sights, they made the rear iron sight removable in favor an optic or scope. The lower receiver is what drew a lot of my attention. The SAINT’s trigger was extremely smooth but had an audible reset ‘click’. I found this extremely helpful in between precision shots. The pistol grip also stood out. Its textured grip felt secure in my hand and was very slip resistant.

Notes about the lower receiver:

Notes about the rifle bolt:

We had the privilege of first gaining a battle sight zero (BZO) on the rifle at 100 yards and then running through a lot of ‘fast reaction’ drills and under the guidance of the legendary 29-Time USPSA National Champion Rob Leatham. Each gun writer had differing levels of experience but we all stood to learn something from Leatham.

Where The SAINT Shines Brightest

Where I saw the SAINT shine brightest was during the fast reaction drills. I have no doubt that the SAINT can launch precision shots out at 300 yards and beyond. It definitely proved its ability to take a beating when some of the writers entered into a rapid-fire competition. Writers were given 120 rounds and 55 steel targets. They had to hit each one in order to knock it down. Whomever hit the most targets in the least amount of time won themselves a SAINT.

Firing high-grain Winchester rounds and an average time of 66 seconds, these gun writers definitely demonstrated that the SAINT is conditioned to handle the stress of heat.

My interest was in a home defense and car defense AR-15. I was more interested in a rifle that could cover the yard or a hallway, not bag a deer across the vale. I needed a rifle that would be an asset when stored in the car or the bedroom. For both of those caveats, the SAINT definitely won.

My expectations for Springfield Armory’s SAINT are that it would be light, easy to handle, maneuverable, and relevant to the concealed carry community. Insofar as a concealed carrier needs a good solid home defense rifle, the SAINT definitely hits all the caveats. I could also see the SAINT being something that I would recommend to my own mother. It’s that reliable and accessible even for people who know little to nothing about firearms.

The AR-15 rifle platform has been around for a long time and Springfield Armory definitely raises the bar with the SAINT. It’s great at short and medium but can also reach out and touch someone at ranges up to 300 yards. At a price point that nearly anyone can afford (MSRP $879), the SAINT AR-15 is an accessible, reliable option for home defense.