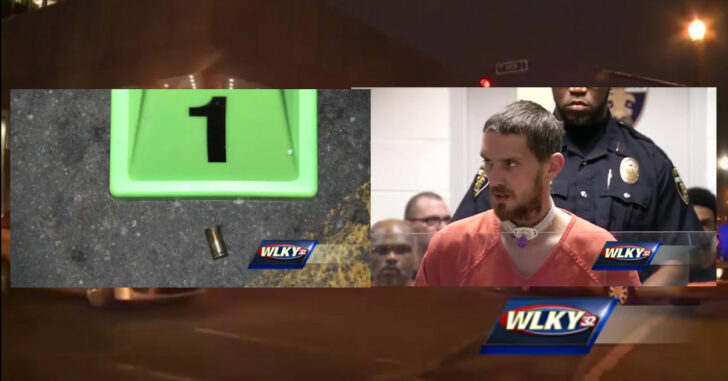 LOUISVILLE, KENTUCKY — A prior felon out on probation is being accused of first degree robbery and attempted murder after he assaulted a woman returning to her car in a parking garage. Surveillance footage showed him entering the same elevator as the woman and then later following her to her car. Thankfully, she was armed.

According to WLKY, the event took place back in January but the assailant is just now facing preliminary charges. He claims he ‘blacked out’ and doesn’t remember what transpired — but the victim does and she was all too willing to recall this emotional event for both the news and prosecutors.

“And the first time I pulled [my gun], nothing happened. And he put his hand harder on my mouth and shoved the knife towards my face and then I shot again,” the victim said.

According to witness testimony, he attacked her while she was seated in her car. She managed to get her gun out of concealment but it allegedly didn’t discharge the first time she pulled the trigger. The man was pushing a knife towards her, not listening to her pleas for mercy, and demanded her money. Sounds like he was pretty conscious at the time.

Thankfully, she gave her survival another go. She pulled the trigger again. This time it did go off. She scored one direct hit to his throat.

“I shot him again while I was sitting in the car and then he starts running and I got out and shot him again because I thought he was going to come back towards me and kill me,” the victim said.

In this type of encounter, she had every right to fear for her life. This man pursued her, targeted her, and followed her to her car where he then tried to assault her with a knife. If she had not been armed, she could have been very seriously injured or even killed in this encounter.

Thankfully, she was unharmed.

Her assailant, John Ganobick, suffered a life threatening and permanently debilitating injury to his throat. He recovered in a hospital before being brought in on charges ranging from attempted murder to first degree robbery and criminal mischief.

While Ganobick does have a criminal history, this appears to be his first violent offense.

We have covered a startling number of instances where armed criminals will attempt to target lone females out in a parking area. It’s a pattern that’s dictated more on predator and prey mentality than anything else. In fact, just recently, a 23-year-old woman had to use her pistol to defend her life from a man who assaulted her in the parking lot of a Circle K gas station. That man was fatally shot.

When people start carrying everywhere, criminals have a lot more to worry about. It’s no longer a question of who looks like the easier meal — it’s who will use deadly force to protect his or her life. It could be anyone. It should definitely be you.