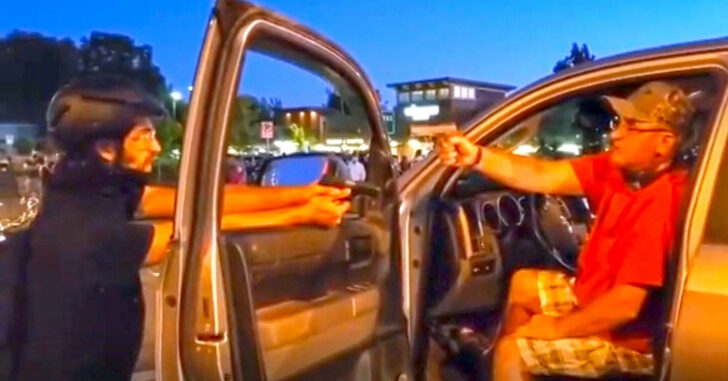 Never pull a gun if you don’t have the intention of pulling the trigger. Drawing a gun as intimidation is never good, and you should only do so if you are in fear for your life.

The rather calm demeanor displayed by the driver in the video below, looking like a “don’t mess with me” attitude, would suggest that the drawn gun is there for display purposes only.

And the protester’s response with drawing his own gun, well, that’s debatable as well. It could be seen as a self-defensive draw, or it could be two people flexing their muscles during a tense time in America.

I get that people are tired of protesters/riots/looters, and I get that protesters are tired of drivers trying to… drive. These incidents have got to stop, however. Just this weekend, a man died after allegedly pointing a rifle at a driver, who also had a gun and fired it in what seems to be self-defense.

Where is this Country heading, and have we yet to see the worst?