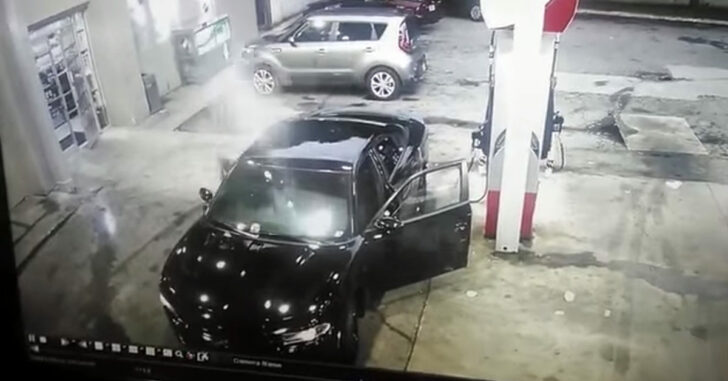 An attempted robbery at an Atlanta gas station turned tragically violent after the armed robber blindly opened fire fleeing an armed victim. The robber’s bullets struck the passenger side of the vehicle and one hit a passenger in the arm.

According to NBC Atlanta 11, the woman was safely transported to the hospital and received medical care.

If you watch the video, you can see the armed robber approach the driver from behind while the driver tries to get back into the car. When the robber appears to make his move, the driver pulls out either a Zastava or a Draco AK-47 styled pistol.

The driver does not open fire but attempts to subdue the robber who feigns surrender until he thinks he can make a getaway.

The robber then blindly opens fire at the vehicle, resulting in one person shot.

This is the type of ignorant garbage we can expect from armed criminals with no understanding or respect for human life.

As a concealed carrier, what would have been the best way to deal with this threat?

Well, first and foremost — the driver messes up at one critical juncture. The robber makes a blatant attempt to draw a pistol after he has a gun pointed at him.

A thug so stupid as to attempt to draw from the waistband while he has a pistol loaded and aimed at him deserves no second chance at causing harm to others.

This driver wanted to give this man every opportunity to not face grave harm. The thug blatantly didn’t care. Kindness met with cruelty. It’s not something we can bet on but it’s certainly something dumb, violent criminals will prey upon.

Previous article: Fighting From A Vehicle -- Recap Of Atlanta Car Thug And Reviewing What We Need To Do Next article: [VIDEO] Concealed Carrier Killed Because He Failed To Spot The Accomplice