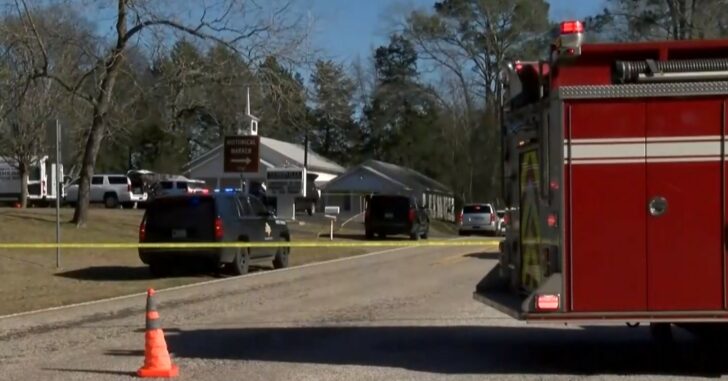 STARRTILLE, TEXAS — A pastor is dead after he opened a bathroom door at the church and found a man who had been hiding from police after a car chase. That man apparently broke into the church in his attempt to evade police.

After the confrontation, the pastor pulled out his gun and told the man to stop, but he did not listen. Instead, he lunged at the Pastor and gained access over his firearm.

The pastor was shot and killed.

Another person at the church was also shot and treated at the hospital. One other person was injured during a fall.

The suspect was shot in the hand, but managed to steal the pastor’s vehicle and flee. He was later captured and taken for treatment to the hospital.

“Our hearts are with the victims and the families of those killed or injured in this terrible tragedy,” Gov. Greg Abbott said in a written statement. “I am grateful for the law enforcement officers who apprehended the suspect, and I ask Texans to join Cecilia and me in praying for those affected by this horrific shooting.”

This terrible incident may not have been avoidable, but different techniques could have aided the pastor in successfully handling the situation. It could have been a hesitation to not shoot, or maybe believing that the man would not have acted aggressively.

There is much to say about training, and certain training can help people to make these difficult decisions, and also to be more prepared for what may come our way.

Previous article: 80-year-old Man Shoots 15-year-old During Armed Carjacking Attempt Next article: Is Your Concealed Carry Gear Absolute Crap? It May Take You Time To Realize It.