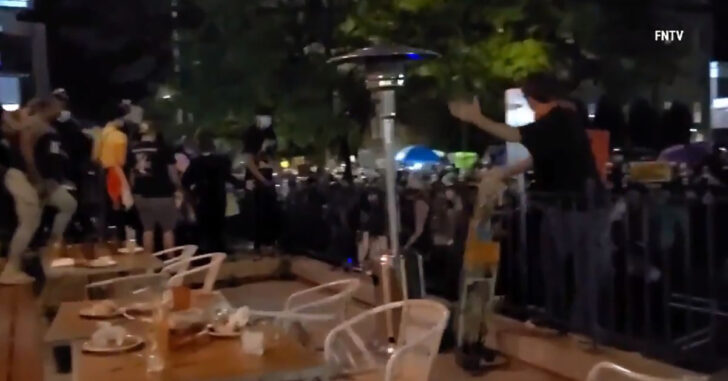 The goals of some Black Lives Matter protesters are lost on me when I see this type of behavior, wondering why they’d approach people eating at a restaurant and begin taunting them.

Is it because they’re not marching with them. Are they just trying to make a big statement?

If it’s either of those reasons, they should realize that it’s hurting their cause so much more than helping. I agree that the videos legitimately showing police brutality on black Americans is appalling, but there’s a right and wrong way to have your voices heard and advocate for change.

It’s the same feeling I get with the riots, but the majority of the rioters are not actually associated with the BLM movement. They’re just taking advantage of the protests in order to cause chaos and destruction.

But this. It seems that they’re a legitimate part of the BLM movement, harrassing people who are doing nothing wrong. If that’s their angle, that the people killed by police were also doing nothing wrong, it’s not an effective tactic. If aggressive behavior like this is witnessed by anyone not involved with your actions, the people on the receiving end of the aggression are going to immediately have negative thoughts on everything that you’re doing.

And it’ll be tough, if not impossible, to later change their minds.

Previous article: [VIDEO] Concealed Carrier Loses Gun During Fight, Thug Set Out To Murder Him But Luckily Couldn't Work Safety Next article: Protester To Cop: "Go On Instagram Live And Kill Yourself So We Can All Watch"