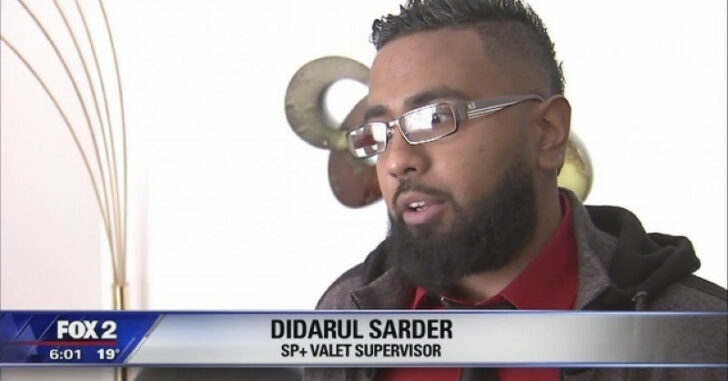 WARREN, MICHIGAN — Despite the supervisors at a plant in Warren Michigan terminating a concealed carrier’s contract for employment following his defense gun use, he admits to WJBK that he regrets nothing about his actions.

“I would do it all over again,” he told Fox affiliate WJBK. “If I could save this woman’s life over a job. I can get another job.”

If you’ve been following this story, it’s an utter example of a good guy with a gun being on hand to stop the wanton murder of an innocent by a knife-wielding bad guy (woman, in this case).  We had the pleasure of covering this story several days ago.  To recap briefly: a man attacked a woman with a knife at a GM plant in Warren, Michigan.  Thankfully, a law-abiding concealed carrier happened to witness the event and use his firearm to hold the female assailant woman responsible.

He was afterwards asked to leave the premises and the Washington Post confirmed that GM had initially revoked his contract to work there.  The Mayor of Warren came out publicly against the company’s decision in vehement support for the good guy in this situation.

“Had he not legally exercised his second amendment rights this woman would probably not be with us today,” he wrote. “He is employed by a GM contracted valet service. Right after it happened someone in authority asked him off the premises because he violated company rules with a gun. That was absolutely the wrong response to this hero. However that decision was over-ruled by higher ups and he now has his job back.

“Hero’s should be rewarded not terminated,” he added. “Didarul is a resident of Warren and a resident that we can all be proud of!”

Since then, the Washington Post has confirmed that GM has renegged on their previous decision to terminate the concealed carrier from his job.  The concealed carrier appeared obviously shocked to have been terminated but ultimately had come to peace.  He said his reaction to the situation was natural.  The victim was crying out for help, saying she was dying, and he didn’t want to just stand by and let it happen.

This is precisely why having responsible concealed carriers in the workplace is the right thing to do.  It additionally illustrates that the concept of “stand by and wait for police to arrive” in a life-or-death situation is simply not an option.  By the time police arrived, the assailant would have gotten what she desired: the unlawful death of her target.  Instead, she’s behind bars awaiting charges — precisely where she should be.

Sometimes, bad people only respect the use or threat of deadly force.  This isn’t a case of middle grounds.  If that concealed carrier had not acted in the way he did, there would have been a needless death as a result.  It’s a good thing GM caved to pressure in this case because otherwise it would have set a real bad precedent with company workplace policies.  We’re not just automatons standing by, waiting to be murdered by someone.  We’re human beings and when we see others hurting, it’s only natural we’ll do our best to stop the source of the problem.

Simply can’t say enough good things about how this guy handled this situation and we certainly hope that the victim makes a speedy recovery.