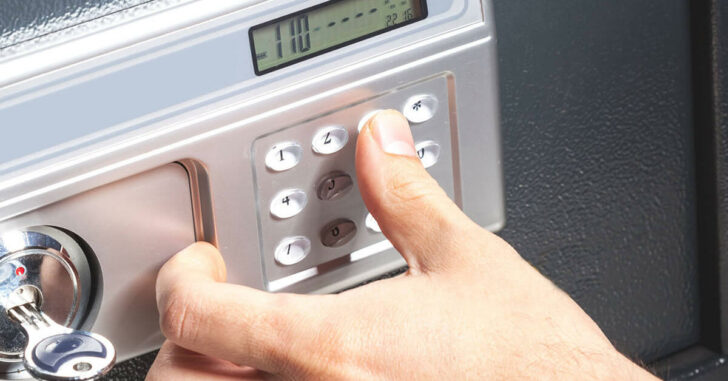 Many people throw a pistol in the nightstand next to their beds and that’s the ‘go-to’ gun while they sleep. But, recently, we got a lot of questions from readers who live in situations where that may not be an option.

Because this question got asked many times from different viewpoints, we’re going to break down the big ones and go from there.

“I live in a house with my friend and her boyfriend. However, she also had an ex that has broken into the home during the night. That was awhile ago but it got me thinking that it’s possible, right?

My dad got me a Ruger LC9 for my birthday. At first I just put it in a little drawer on the nightstand but if I have my boyfriend over, I don’t want him accidentally finding it while he’s trying to find something else in that drawer.

Where should I keep my gun so I can use it if I need to but nobody else will stumble onto it unless they know it’s there?”

In a co-habitation situation — i.e. you’re living with someone that’s not your significant other or your child — you need to secure your gun when it’s not on you.

I haven’t figured out a way to sleep with my gun on me. I probably wouldn’t even if I could. I don’t recommend putting a gun under your pillow. That’s not because I’m worried a Ruger LC9 is going to magically set itself off. It has more to do with autonomic movements in the body during the night that I would be less comfortable testing out.

A drawer in a nightstand isn’t a bad choice. But, obviously, if you have other things in that nightstand — like condoms — you don’t want someone fishing around for them in the dark and accidentally grab the gun.

My honest recommendation is to store the gun in another drawer nearby. If your nightstand only has one drawer, find a way to store it in a drawer next to the nightstand. I don’t know how your bedroom is set up but I’m positive there’s a way to keep the gun secure and nearby.

Another popular location is keep it in an unlocked pistol safe beneath your bed. That’s a location that’s pretty easy to grab. So long as the safe is unlocked, you can just open it and go. If you need to lock it up, lock it up. Easy, peasy.

Here’s another one we got from a Concealed Nation reader:

“I live in an apartment with three other dudes. While they’re mostly cool, we don’t talk that much and I don’t trust them enough to let them know I have a gun, much less leave it somewhere one of them could find it.

I work late and I can’t carry a gun at work, so I kept it in the nightstand next to my bed in a pistol lock box.

Last month, one of my roommates hosted a party and there were quite a few people that came over. I came home late to find a couple asleep in my bed and, in addition to being really angry at them, I was really worried because I had my gun in the nightstand.

There’s a risk of it being stolen. But, so far, I don’t think anyone knows it’s there.

Where should I put my gun when I sleep so it’s close by and accessible but still secure?”

If you can’t carry with you and you need to leave the gun at home, you’re absolutely right to keep it in a pistol lock box. The problem with a pistol lock box is that it is easy to steal — so you’re right to worry about that, too.

There’s a risk of taking the pistol with you and keeping it in the car. Your car can be broken into.

So, really, we’re looking at a risk issue. Which is a greater risk: storing the gun in your car or your room?

If the greater risk is storing it in your car, then I would suggest moving your pistol lock box to a location that wouldn’t be a first guess for someone entering your room. A couple locations I hid a pistol lock box when I had roommates: beneath a dresser, at the bottom of a dirty laundry hamper, behind a row of boring chemistry textbooks on my bookshelf…

Sometimes it’s just not logistically or financially feasible to move a great big, bulky safe into your room to store a single firearm. That said, if you haven’t told your roommates you have a gun — that doesn’t mean none of them know.

If possible, I’d personally keep it in my car unless car theft and break-ins seemed to be a greater risk than your apartment room.

This one hits a place many parents can understand — the safety of children in the household. And it’s not always just your children you have to worry about with guns! This next reader gave me something to ponder:

“I live with my son, my sister, and her son, and my elderly mom in my mom’s house. Recently, I had to get a gun to protect myself because my restraining order ran out on an abusive ex.

My child is 7 and while I think he’s smart, he also isn’t ready to know about guns. My sister’s son is 8 and he’s developmentally challenged. I absolutely don’t want him getting his hands on my gun.

Because my son sleeps in the same room with me, I have to keep the gun locked up in a pistol safe during the night.

There’s nothing ‘off limits’ in our house. These two boys will go anywhere in the house. They don’t knock, they run through doorways and halls. However, I walked in to see my son and his cousin trying different lock combinations on the safe. This sent me into a panic because, obviously, I don’t want either of them touching the gun. I got on my son’s case about it because he’s my son. When my sister found out, though, she thought it was dumb that I had a gun in the first place and told me to get rid of it.

I’m obviously not getting rid of it. I need to be able to protect myself!

How do I keep a gun in this household while making sure my son and my nephew don’t get access.”

This is a unique situation. I’m guessing you have a keypad entry pistol safe — good move. The kids are obviously too young to try to pick it up or move it. They’re probably curious about what’s inside the safe. I know, at 7, I would be.

There’s two basic approaches: education and security. I don’t know your situation intimately but I would start by letting them know what is inside the safe. I’m guessing it’s just a gun, a few rounds of ammunition, and potentially some valuables.

That’s easy enough. Now they know what’s inside and they know it’s a boundary. They are not to attempt to open the safe.

If you catch either of them attempting to open it, that’s however you deem fit to dole out punishment. However, I would seriously consider going an extra step and getting a biometric safe — something that locks to a thumbprint and code. This way, even if they guessed a code correctly, they would still need a fingerprint to get through.

Unfortunately, there’s no easy way to deal with children and guns so long as they’re uneducated about how to handle them safely. Educate those children on the proper handling of firearms. And maybe it’s time to take them to the range to get a chance to see that gun in action — so they know the risks of improper handling and the fun of when it’s done right.