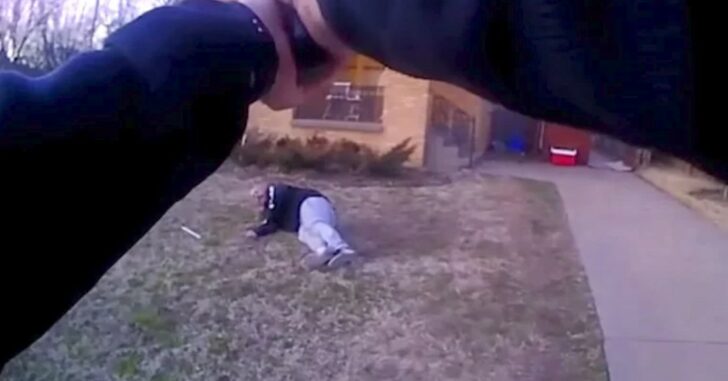 An Oklahoma Department of Corrections escapee reportedly beat a homeless man over the head with a baseball bat before he met his match in an Oklahoma City police officer. When Kirk Dustin Shields charged the cop with a crowbar or pipe, the cop initially ran for his life to create some distance. In doing so, he gave himself some time to implement a successful counter-attack.

In the end, Officer Brandon Lee deployed his GLOCK and fired to stop his attacker. Watch the dramatic scene play out on bodycam footage (NSFW language):

Body cam footage shows an officer-involved shooting of a Department of Corrections escapee.

On Jan. 30, 2019 at 6:07 p.m., Officer Brandon Lee arrived at West Park Place and Linn Avenue. He observed the suspect, Kirk Dustin Shields, in front of 2608 West Park Place, who had a crowbar-type object in his hand. The suspect ran to the east, and Officer Lee pursued him.

Officer Lee discharged his firearm and struck the suspect.

An earlier story from January has more background on the incident, and the violent nature of the offender who attacked Officer Lee. From News Oklahoma:

An escaped Oklahoma Department of Corrections inmate shot by a police officer Wednesday night in northwest Oklahoma City had attacked a homeless man with a baseball bat, police reported.

Kirk Dustin Shields, 38, who walked away from the Carver Transitional Center halfway house earlier in the day, was shot by officer Brandon Lee about 6 p.m.

Lee had responded to a report of a man looking into houses in the 2600 block of W Park Place. Lee found Shields holding a tire tool in his hand, said police Capt. Bo Mathews.

Shields ran from Lee, and Lee followed him until Shields turned and charged, Mathews said. Lee then fired a Taser but it did not stop him, and Lee fired his gun and hit Shields. Shields was taken to a hospital where he was treated for a wound that was not life-threatening, police said.

Shortly after Shields was shot, Earl Wayne Alexander, 33, a homeless man, walked up to officers at the scene. Alexander was bleeding from the head when he told officers that Shields had attacked him with a baseball bat near N May and W Park Place, Mathews said.

Alexander was taken to OU Medical Center where he was in fair condition Thursday, a hospital spokeswoman said.

Shields has past convictions on larceny, burglary and eluding police, court records show.

Cop or civilian: if someone charges after you with a knife or blunt force instrument, the first order of business is to create distance if possible and/or put obstacles between you and the bad guy. Even if you have a weapon in hand. Distance and/or obstacles give(s) you time and time gives you options.

Some may say, “If you have your pistol in hand, why do you need to retreat to create distance?” Simple.  Handgun rounds don’t put people down like in Hollywood.  Even if you administer a fatal wound on the bad guy, he may need some time to bleed out.  In that time, if he busts your melon open with his crowbar before he realizes his goose is cooked (or because he realizes his goose is cooked), that’s not a win for the home team.

Once more, handguns don’t deliver reliable, instant stops.   Here’s one of my favorite (NSFW because of language) Clint Smith videos on the topic of terminal ballistics.

“Shotguns, at the right range with the right load, will physically remove a chunk of (stuff) off your opponent and throw that (stuff) on the floor.  And you’ll have to get someone to come in and clean the (stuff) up with a shovel.”

Officer Brandon Lee performed in a textbook manner, turning and running after his TASER failed to stop the aggressor. That few seconds he bought by running allowed him opportunity to draw and engage with his sidearm, stopping the threat before the threat stopped him.

Previous article: Springfield Armory's XD(M) 10mm is a nice addition to anyone's collection Next article: Detroit Woman Uses Concealed Firearm To Stop Another Woman Attempting To Run Her Down With Her Vehicle