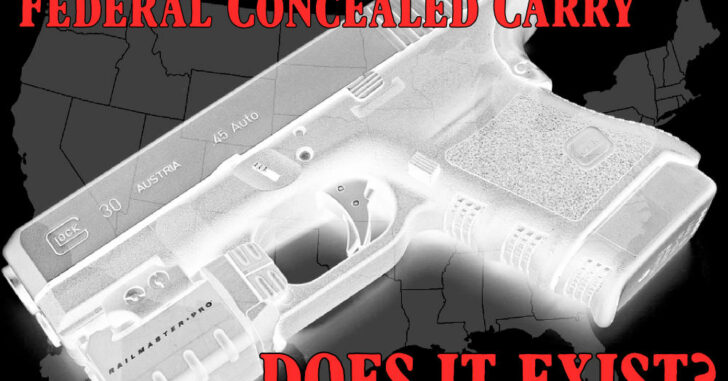 We get asked this question a lot.  Is there a way, essentially, to get a concealed carry permit that’s valid through all 50 states and the District of Columbia?

Outside of the Second Amendment?

Law enforcement officers are covered under an act known as LEOSA or the Law Enforcement Officer Safety Act.  This entitles many sworn officers to travel through all fifty states AND the District of Columbia with their concealed carry handguns.  This is probably part of the reason why two off-duty NYPD cops were able to subdue a man who was stabbing his victim in the middle of Hollywood Boulevard.

LEOSA is awesome.  Unfortunately, for many of us, this just isn’t a possibility.

We also deal with the silly problems of states not acknowledging each other’s right to issue permits in the first place.

So, how would you go about being covered in the vast majority of states?

Turns out, step 1 is to be a resident of the State of Michigan and have a concealed pistol license (CPL).  What makes Michigan so special?  Who knows!  But their permit is acknowledged in 37 out of 50 states. So, that’s just one more great reason to brave the winters in Michigan.  Unfortunately, Michigan doesn’t issue non-resident CPLs — so if you’re not a resident, you’re out of luck.

Out of the remaining states that don’t acknowledge a Michigan CPL, only two of them will not issue to non-residents.  California and Delaware.

Congratulations, Michigan!  You’re one of the very few states that is acknowledged by Delaware!  So, you don’t have to worry about them.

Best Bang For The Buck For Non-Resident CCW Permits

Going off the Michigan resident scenario, it’s possible to get a non-resident concealed carry permit in most of the remaining states.  New Jersey, Massachusetts, Maryland, Hawaii, District of Columbia, Illinois, New York, Nevada, Oregon, Washington, and Rhode Island all have non-resident concealed carry permitting processes.  Only four of them are “shall issue” — Oregon, Illinois, Nevada, and Washington.

If you are a resident of Michigan, none of them grant any help for the others.   If you got non-resident permits in all the four, you would only be able to travel in 41 out of 50 states with a legal concealed carry pistol.

Okay, so you’re not a resident of Michigan — what then?

I’ll take my home state as an excellent example.

As a New Hampshire resident, though, I need to obtain a minimum of THREE non-resident concealed carry permits in order to have the same level of reciprocity that a resident of Michigan would enjoy.

Those non-resident permits would be: Now, depending upon where you live, it may make sense to pursue a particular state’s non-resident concealed carry permit.  Popular choices include:

These states all enjoy a large number of state-to-state reciprocity.  Each is not needed but the right combination will likely cover almost any of your travel destinations.

And that’s as close as we can get to a Federal concealed carry license for right now.

Previous article: Responsible Gun Owners Don't Return To A Conflict Next article: [CCW In Action] Detroit Bar Owner With CPL Fights Back After Thug Shoots Him