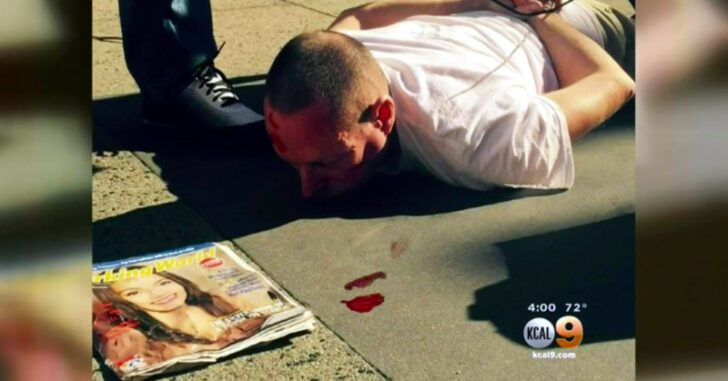 Imagine walking along Hollywood and Highland boulevards with your family, soaking in the great American glitz.  This is the scene that took place right before a man was repeatedly stabbed by a madman.  Thankfully, two off-duty NYPD officers were able to subdue the attacker until the Los Angeles County Sheriffs Department could arrive.

If those two off-duty NYPD officers hadn’t been there and able to carry concealed (thanks to LEOSA), this man could have lost his life right in front of his own family.

The LA Times covered an article about this recent high-profile stabbing along the super-kitsch section of Hollywood Boulevard.  This is a place where people take their families to gaze upon the elegance and gaudiness of the American limelight.  Hollywood is a big travel destination for a lot of people.  It’s a chance to see the glitz and glamour of celebrity culture.  And, unfortunately, it also highlights another unpleasant feature about this place: California gun laws.

In the state of California, counties are able to dictate the rules.  Some counties are “shall permit” and others are effectively “no permit”.  This is being contested right now in the courts but, in the meantime, if you’re a tourist from out-of-state, you’re not able to defend yourself.

That’s because California has no reciprocity with other states.  Unless you’re covered under the Law Enforcement Officer Safety Act (LEOSA), you’re not legally carrying concealed while you’re visiting Los Angeles or any of the other extravagant metropolises.

This is no deterrent to criminals.

When the state has a monopoly on force, it means the individual has to rely purely on situational awareness to avoid being victimized.  That, by itself, isn’t enough.

How should this story have ended?  The anti-gun advocates out there will say, “so what, thank goodness police were nearby.”

For those that don’t believe in luck or divine providence, carrying concealed is just one added step to taking control of a situation.  It doesn’t guarantee success or victory, but it does even the odds.

Nobody wants to be placed in a situation where he or she has to effectively throw himself in front of an attacker to save his family.

That’s what happened in Paris with one mother defending her child with her own body.  It also happened in Lebanon with a heroic father saving his daughter and countless others when he tackled a suicide bomber.

It happens too often.  Why?

Why is it implausible for every person in the entire world to have the right to defend his or her own life and that of their families?

When I see stabbings like this and all the atrocities the world over, I’m left with the impression that if anyone is waiting for the cavalry to magically arrive in time — they’re often left waiting in vain.

The right to defend yourself should never be an option for state decision.  That is an inalienable right and, believe it or not, it’s not guaranteed by the United States Constitution’s Second Amendment.  It’s guaranteed by natural law.

Personally, I don’t want to live life in the “victim mentality”.  I won’t just roll over, belly up, when violent individuals show up to do my family or myself harm.

When you tell a person that he’s better off being stabbed or attacked in front of his family than defend himself adequately, what sort of message does that send?

Ask those questions next time someone says, “allowed”.

That’s why I carry.

Previous article: Obama Signs Law That Allows Public Sale of Surplus U.S. Army 1911s Next article: ISIS Threatens NYC In New Video: How Many In The City Can Defend Themselves?