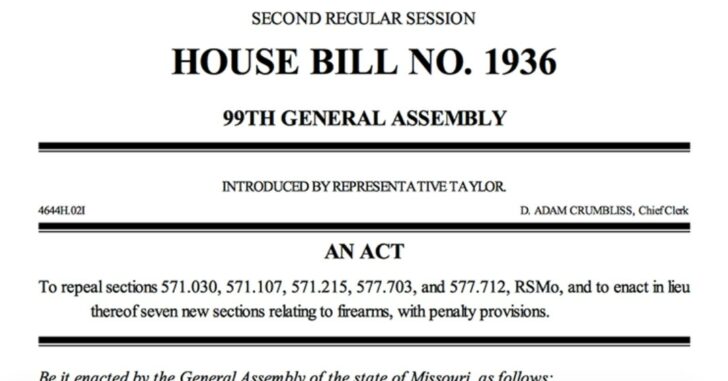 St. Joseph’s newspressnow.com says Missouri pushes to put firearms in gun-free zones. That’s one way to look at it. We’d word that headline a little differently. How about, “Missouri Bill Would Expand Carry Rights, Reduce the Number of Gun-Free Zones.”

A bill filtering through the Missouri House of Representatives could put guns in more establishments around the state.

House Bill 1963 was passed through a House Committee in February and would make many establishments considered gun-free zones the exact opposite.

The bill (you can read it here) would eliminate a significant number of locations in which it’s currently illegal to carry a firearm. Specific types of businesses like hospitals, churches, bars and schools are currently off limits for anyone legally carrying a firearm. Criminals, of course, are free to go about their business as usual.

Anytime we can give the ability to individuals that are doing it lawfully [carrying a gun], who want to protect themselves, let them make that decision in the heat of the moment and maybe stop a mass shooting before it starts,” said Rep. Jered Taylor, R-Nixa.

If the bill becomes law, any property owner who wishes to deny carry rights in his establishment would be able to post the appropriate signs in his or her bar, school or church and remain a “gun-free zone.” Just as other non-prohibited establishments currently do. Concealed carriers would then have the option of patronizing the business or not, just as they do now.

Where’s the problem with that?