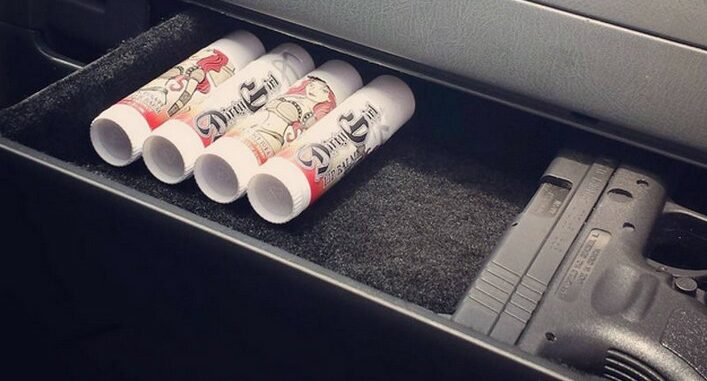 At Concealed Nation, we’re always curious to test out new ways and methods of securely carrying a firearm on either a vehicle or on one’s person.  Recently, we had the opportunity to talk with a company down in Georgia that does specialized construction of conceal carry vehicle compartments.

Monty of Conceal Pro, a Georgia-based company specializing in OEM firearm compartments for vehicles, agreed to sit down for an interview with Concealed Nation. We had a lot of questions for him specifically related to why he got into the business and how he feels his compartments have benefited concealed carriers.

JE: What got you into the business of installing and fabricating custom concealed carry vehicle compartments?

“I’ve been in the fabrication and custom electronics for vehicles for 20 years,” Monty explained. “Over the years, I’ve had quite a few people who’ve asked me to build concealed carry firearms compartments.”

Around two years ago, Monty said he started to get more and more requests for concealed compartments and vehicle gun lockers. With encouragement from his wife, who he credits for most of the social media interactions, he’s found the industry to be quite receptive.

Since then, Monty said he’s been contacted by a lot of law enforcement agencies operating in his neck of the woods. Cited in his previous work is the custom installation of motorized latches and locking weapon systems for groups such as SWAT.

“We do a lot of work for agencies with SWAT teams.  [Conceal Pro] has designed a motorized trunk locking system that allows use of the entire trunk of the car without using a bulky box that creates a dead space. It also does away with the chain locks that a lot of agencies currently use.”

JE: How have people learned about your business?

“Most of Conceal Pro’s work has been by word of mouth. Many of the police and law enforcement groups we’ve worked with have lead into further work.”

Monty went on to explain that there’s an increasing demand to equip vehicles with the means to securely and safely store firearms in a convenient manner. “A lot of law enforcement vehicles don’t want to create any dead room [unused space], so we do locking systems for weapons and motorized latches for the trunk.”

JE: What sets you apart from just putting a firearm in a glovebox?

“We get a lot of people who want what we do.  I think one of the things people really like is it’s not just sticking a gun under seat or center console or glovebox,” Monty said.  “Those are places that if somebody breaks into car, that’s the first place they’re going to look.” “We build the compartments behind the factory panel.  [When it’s closed], there’s nothing to see, nothing to steal.”

JE: So your compartments rely more on concealment?

“Well, yes and no,” Monty laughed.  “Our compartments are all metal.  Let’s say it’s behind a factory panel, then there’s the all steel compartment that we install and it only opens through motors.  So it’s completely flush and smooth with everything else in the vehicle.”

“The problem with lock-boxes is if they [thieves] see a lock, they’re gonna try to destroy the vehicle to get it out.  We try to keep everything as factory as possible.  The last thing you want to have is have a firearm stolen.” JE: What are some of the big constraints you run up against in this industry?

“The only thing we run across is legal [stuff].  There’s a lot of bad information about concealed carry out there.  Heck, we’ve even had law enforcement officers saying what we’re doing is illegal.  But the thing we point out is that states have laws regarding concealed compartments.  Our state – Georgia – is one of them.”

Monty went on to say he certainly encourage each person to check with their state’s definitions of concealed carry compartments in vehicles prior to getting one installed.

JE: What are some of the ground rules for using a concealed compartment?

“It’s pretty straight forward in Georgia and other states.  If you’re using the compartment to store illegal items, then it’s illegal.  If you’re a law-abiding concealed carrier, there’s nothing wrong.”

JE: Have you gotten any complaints about your work?

“If you check out our videos on Instagram or on our Facebook page, you’ll see a couple people saying that compartments open real slow.  One thing people may not realize is that these compartments are meant for secure storage.  If I’m in the vehicle, I’m going to have my firearm physically on me.  If I’m going into somewhere where I can’t carry, I want to be able to store my firearm safely and securely.”

While Conceal Pro mainly does their work out of Georgia, you can still check out their Facebook page to learn more information about contracting them for your concealed carry compartment.