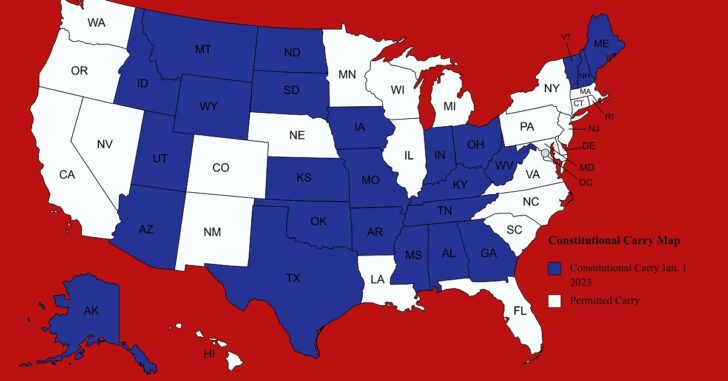 It is going to be a huge year for the Second Amendment, folks.

Even as we have President Joe Biden referring to the idea of buying semi-automatic weapons as “sick” and lacking any “social redeeming value” and trying to curb our 2A rights a little bit at a time, more and more individual states are starting to realize that the most immediate answer to a bad guy with a gun is actually a good guy with a gun.

Now, finally, we’re going to see half of the states in the U.S. recognize constitutional carry as law.

No fewer than 25 states will recognize that a responsibly-armed citizen doesn’t need government arbitration to carry a concealed handgun as of Jan. 1, 2023, according to USCCA.

Alabama’s new constitutional carry law will take effect then, pushing us to the halfway point in this country.

It doesn’t look like Alabama will get to rest in the spotlight for long, however.

According to the Tampa Bay Times, Florida’s permitting process may be headed to the chopping block in 2023.

Governor Ron DeSantis reportedly said earlier in December that he expects legislation this coming year that would permit constitutional carry.

“Basically, this was something that I’ve always supported,” DeSantis said according to the Times.

Florida’s home to better than 22,000,000 people, according to the U.S. Census Bureau. That’d be a huge win for concealed carriers.

More than the number of people in Florida, that’d push us past the halfway point for constitutional carry. More than half the states in the union would recognize the right to keep and bear arms more fully.

Let’s be real, here. We’ve got a president who doesn’t like guns. We’ve got a senate unlikely to do us any favors, either.

But, man, are the states not coming through for us?