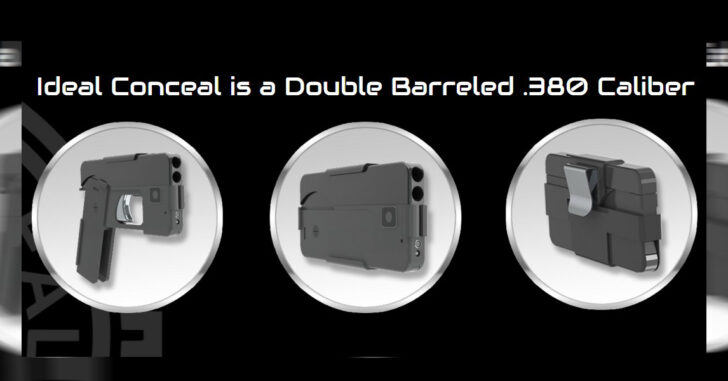 I’ve been sitting on this article for over a week now. I just didn’t know how to approach this new concept phone that may one day be available for purchase.

First, let’s hear from the creators themselves, via their website introduction:

Welcome to Ideal Conceal. Carry with confidence, conceal in style.

The best gun is always the one you have with you.

In today’s day and age, carrying a concealed pistol has become a necessity. But what if you didn’t have to conceal?

That’s where Ideal Conceal comes in. Smartphones are EVERYWHERE, so your new pistol will easily blend in with today’s environment. In its locked position it will be virtually undetectable because it hides in plain sight.

Guns created to look like everyday items is definitely not a new concept. History has given us cane guns, umbrella guns, and other discrete items that pack a punch.

But a cell phone, in the age of nearly everyone walking around with one? I’m just not sure, but in the end it still boils down to the person behind the tool. I first noticed backlash on this concept in the realm of criminals using them for… criminal things. That’s never going to change, of course, but is it worse for a bad guy to have a firearm that looks like something that we don’t think twice about if someone is holding in their hands? Like a cell phone? Have you ever feared a person reaching for their cellphone? Me either.

Is it a gimmick? I don’t think so. I believe the creator(s) saw an opportunity to allow good citizens to carry out in the open if they choose, and in an easy manner. If you’re in a state that doesn’t allow open carry though, this item would likely need to be concealed just like a regular firearm. But then again, would anyone really know?

But remember; cell phones are one of the most stolen items in the world, so you’d better protect this item just as you would your concealed carry firearm. If you’re carrying it on your hip out in the open and someone wants to grab it, now they’ve got something more than the phone they thought they were stealing.

Patent pending and supposedly being available mid-2016 at an MSRP of $395, it’s a 2-shot .380 firearm. Those two shots, however, go bang at the same time when the trigger is pulled. So if you’re looking to buy one of these for yourself when they’re available, you’d better make your 2-shots-at-once count.

In an age of modern firearms with some pretty simple and easy methods of proper concealment, I can’t see a place in my personal life that this would fit.

Although if it allows someone to easily carry two round of .380 in case they’re in a bad situation, because they have no other viable option of carrying a regular firearm, then maybe.

But still, I’d say… see what’s out there first, before jumping to this as your concealed carry firearm. With this one, you only get one shot.

What’s your take on this product? Share your thoughts in the comments section below.

Previous article: Woman Found Dead After Home Invasion, Suspect Moves To Another Home And Is Shot And Killed By Homeowner's Son Next article: Suspect In Attempted Armed ATM Robbery Shot By Victim's Grandson