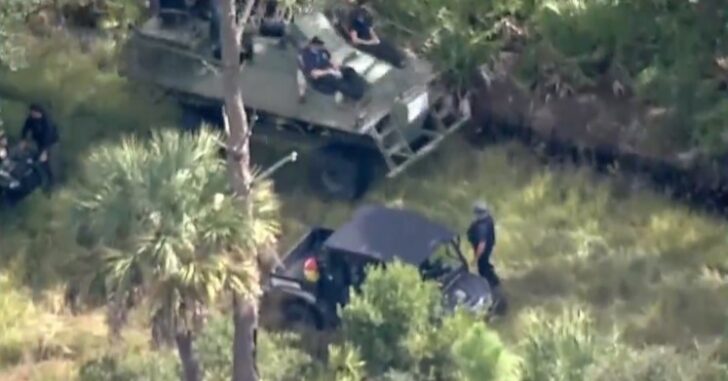 Brian Laundrie has been on the run since earlier this month, following a wild case where his girlfriend, Gabby Petito, was found dead in Wyoming after Laundrie traveled back to his family home alone. It’s been a few weeks of many questions left unanswered, and Laundrie and his parents have refused to talk with police about Petito since the beginning.

According to Laundrie’s family, he took off on a hike on the 14th and hasn’t been seen since. That is even up for debate, but police have been searching a 25,000 acre preserve in Sarasota County, Florida where they believe he may be hiding.

Finally, presumably after the autopsy of Petito was able to determine the time of death, a federal arrest warrant has been issued for Laundrie. However, it’s not for murder.

Court documents obtained by WFLA show Laundrie was indicted for the “use of unauthorized access devices” following Petito’s death. According to the documents, Laundrie used a Capitol One Bank debit card and a personal identification number for two Capitol One Bank accounts “knowingly and with intent to defraud” between Aug. 30 and Sept. 1 in Wyoming. Using the accounts, he obtained “things of value aggregating to $1,000 or more.”

“While this warrant allows law enforcement to arrest Mr. Laundrie, the FBI and our partners across the country continue to investigate the facts and circumstances of Ms. Petito’s homicide,” the FBI said in a statement. “We urge individuals with knowledge of Mr. Laundrie’s role in this matter or his current whereabouts to contact the FBI.”

The reason that we don’t see anything related to murder, I assume, is the need to be very careful with the investigation and what charges are brought. Now at least, it seems that investigators have enough evidence to conclude that Laundrie took money from an account belonging to Petito.

One would assume that with this warrant description, Laundrie was aware that Petito was either dead or missing. At least that’s my take, and the FBI is likely closing in on charging Laundrie with murder.

We got on this story by accident, when there was a look at a possible connection between Petito’s disappearance and the deaths of two campers in the same area, around the same time. It has since been decided that no connection exists, but now we’re in this story. Deep.

A few days ago, we reported on the fact that Laundrie was a missing person and not a fugitive, but things have now changed. Police and the FBI now have the go-ahead to arrest him, but they need to find him first.

Some believe that Laundrie can survive in the wilderness for months, based on his experience. If that’s the case, this chase could go on for some time.

The conditions that police are searching in are less than desirable, with some on the ground sharing video of what they’re having to deal with as far as terrain.

Time will tell, but if you happen to come across Brian Laundrie, be mindful that he is now wanted by the FBI.