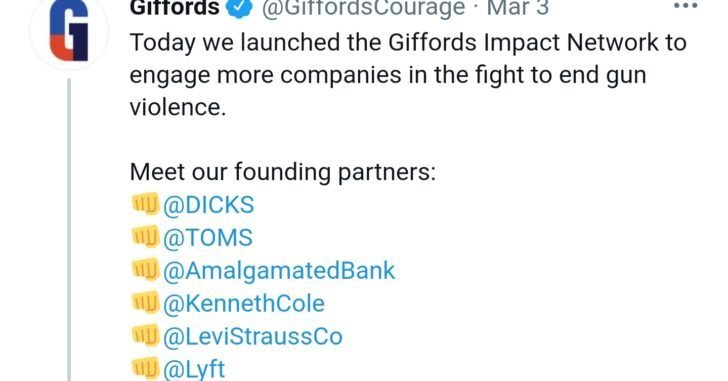 Yesterday, an organization led by Gabby Giffords announced that they’ve enlisted multiple business to stand behind them in their fight against gun violence.

Today we launched the Giffords Impact Network to engage more companies in the fight to end gun violence.

Part of the press release reads:

“Gun safety isn’t a partisan issue—it’s on all of us to take a stand. Even when legislation stalled in Congress, American businesses stepped up to fight gun violence—not just with words but with actions,”  said former Congresswoman Gabrielle Giffords. “This year, Giffords will help companies take next steps to engage with their employees and customers as we continue the work to keep our kids and communities safe.”

That’s quite a few big businesses, and I understand that the choices are driven mainly by the owners and shareholders, but it’s still quite the statement to make.

Americans are moving over to firearms now more than ever. Let’s keep that in mind.

Let’s also keep in mind, however, that serious legislation is making its way through the House and Senate, and could very well pass. It’s going to be an important time for gun rights over the next few years.

Who is in your corner?