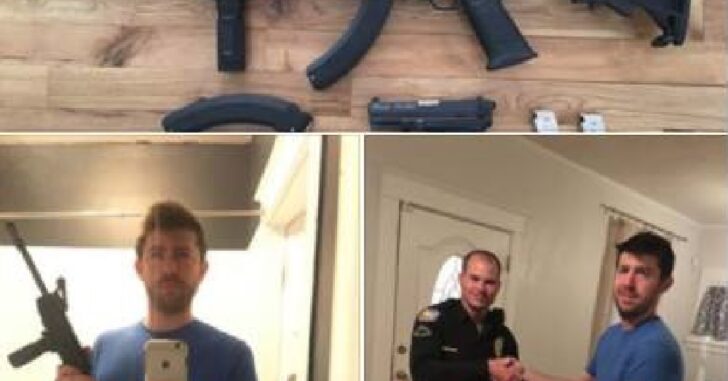 When one man took to the internet to tell the world that he was doing his part in the fight against gun violence in this country, he went viral.

Like, millions-of-people reading his post viral. But there are a couple of issues, one of which I need to get out of the way right now.

To try to sound smarter, he tried to interchange the phrases “In lieu of” and “in light of.”

“In lieu of” means “in place of.” It’s where the military rank “lieutenant” comes from.

The second issue? His reaction to the issue makes no sense in any way, shape, or form.

Here’s his original post, captured and shared by Conservative Country:

What in the??? Well, it's starting…. Unreal. Police state is not the answer either. People still broke the law in minority report!

His solution to stop all gun violence is simple — nobody gets a gun.

So this dude calls the police and tells them he has firearms he’d like to surrender.

He then surrenders his exactly two firearms.

Here’s what’s being missed by a lot of folks on the internet, aside from the aforementioned butchering of the English language:

Those guns are nearly the last ones on earth some bad guy would use.

More specifically, the two guns turned in were a Ruger 10/22 and what appears to be a Ruger PK380.

The PK380, according to Walther, has a “small grip (that) is ideal for shooters with small hands. The slide is easy to operate, making it a good choice for women. The light weight goes unnoticed in a pocket or purse.”

I have nothing against small firearms, but for crying out loud. It’d be like seeing a terrorist incident in which a van inflicted terrible damage to the public and turning in your 2003 Mazda Miata.

This dude wanted his 15 minutes of fame, and boy, did he get it.

Previous article: Upper Hand Given When Suspect's Gun Jams Next article: Father And Son Show No Restraint, Fire On Vehicle That Crashed Into Their Fence