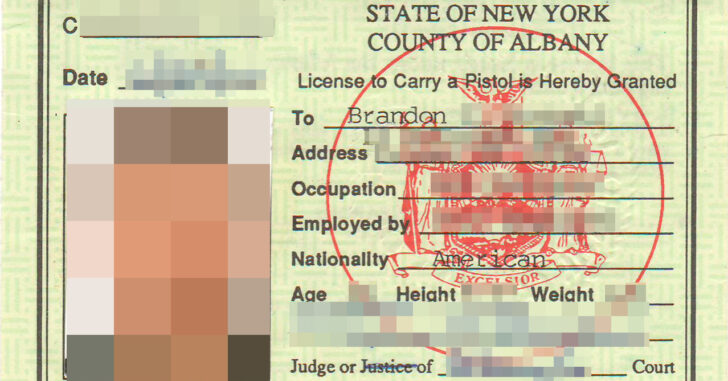 The State of New York gets a bad name in the world of guns. Living in Upstate NY for most of my life, I can tell you that the vast majority of the state is pro gun. The problem really lies in NYC, also known as Upstate’s parasite.

With that comes gun laws that don’t make a whole lot of sense, and some of the implemented processes are pretty ridiculous to say the least. In this article, I’ll be covering a few of these processes that are simply a PITA for anyone looking to get a permit, and some processes that make gun ownership in the Empire State a real hassle.

A Permit Is Necessary To Handle A Pistol

If you’re in New York State and want to touch a pistol, you’re required to have a concealed carry permit issued by the state. Since they have zero reciprocity with any other state, it’s an issue for anyone visiting, or for any friends that you may want to take to the range.

It’s so strict, you can’t even legally hold a pistol in your hands at a gun shop while you’re waiting for the powers that be to approve or deny your permit.

Imagine how this comes into play when you have someone who is interested in learning how to shoot, and might be on the fence about getting their permit. There is absolutely no way they can fire a pistol –or even pick one up– in NY if they don’t have a permit. It doesn’t matter if they’re under your direct control or not.

No permit, no pistol touchy. Period.

The road to a concealed carry permit is a long and treacherous one. If you’ve got a 9 to 5 job, good luck finding the time to get all of the requirements done in a reasonable time-frame. While the process can be slightly different from county to county, here are the basics that need to be completed:

Once you’ve done all of the above, it’s now time to hand everything in. More often than not, you’ll have to make an appointment to hand in your app and accessories with the sheriff or police chief. It’s important to make sure it gets in the right hands, you know. They’ll go over everything submitted to make sure it’s all correct, and then you’re on your way to receiving your permit…

…about 12-14 months after submitting your application.

For the record, mine took a cool 13 months from hand-in to receiving. Just shy of 400 days. Not bad. Yea, sarcasm. I happen to know for a fact that once the application is submitted, it kinda… sits around for a while. Once everything is processed and the application heads down to the county clerk’s office, it’s immediately passed off to a judge for approval. While the judge can take all the time they’d like to finish everything up, they are generally pretty quick about it. At least in Albany County.

This leads me to the conclusion that the application sits around at the local police station for months before it goes anywhere useful. That’s not too productive, but who am I to question the process?

Your Judge Is Your Lifeline

Each of these events requires an amendment to be handed in. And that process is…

The Required Amendment Process Is Slow

As stated above, amendments are something that comes with the territory of being a concealed carrier in New York. As a gun dealer, I see the annoyed look on people’s faces all the time when they realize what they have to do in order to make a simple purchase. Here’s the process, in a nutshell:

Step 5 can take anywhere from a week to months. Again, we’re talking Albany County, but I’ve heard similar stories from other counties as well. And as a contrast, some counties (in the middle of nowhere) will give you a coupon right on the spot. Lucky them.

At the present time, I have a police officer friend who is taking possession of two pistols. He’s going through the amendment process as we speak. It’s been almost three weeks and he still hasn’t received the letter to inform him that his amendment is ready.

The worst part is yet to come.

Be Thankful If You Get A Pro Gun Judge

When the application lands on the desk of a Judge, it’s an application for a permit to carry a firearm. With that, many counties have adopted ‘Administrative Restrictions’ that can be imposed on any and all permits. In Albany County for example, they sometimes simply hand-write these restrictions on the bottom of the permit. It’ll say something like; For Hunting & Target Only. How useful.

Remember though, this is a permit to carry a concealed firearm. Legally speaking, anyone with a restricted permit in NY can still carry a firearm on them. If they happen to get pulled over and the officer happens to find that they’re carrying on a restricted permit, they cannot get arrested and they cannot have their firearm taken from them. The officer can, however, let their judge know that they have been carrying on a restricted. In turn, that judge can yank the permit if they feel it’s necessary. That’s my first-issued permit above. Note the ‘Hunting & Target Only’ writing at the bottom. Once I had the restrictions moved, they simply issued a new permit with no fancy written text on the bottom.

While most permits are issued with restrictions, you can always submit a request to have them removed. This is typically done with a simple letter to your judge asking for the removal of restrictions. Some say yes, while others say no. Take a look at my previous story dealing with myself and my father’s permits. You’re going to laugh and cry at the same time.

Alright, onto the pro-gun judge part. If a judge feels you have too many pistols and are looking to add another to your permit, you could get denied. Really, it’s a thing. While it likely doesn’t happen often, I’ve seen confirmed reports of it happening. I’ve also heard stories of permit holders handing in an amendment, only to have the judge say “Why does this person have an unrestricted permit?” and proceed to try and add restrictions.

If you’ve had judge A for 10 years and they retire or pass away, your next amendment lands on a random desk for the next judge to handle. If judge A was pro-gun and your new judge B isn’t, your concealed carry world could be turned upside down just like that.

Doesn’t seem fair, does it?

If You Want To Travel To NYC, You’re SOL

Carrying a firearm in New York City, even with a New York State pistol permit, is a big no-no. It’s like they are their own little world, which would be fine if they weren’t actually a part of the state. Side note, I have no problem with separating the two. While I haven’t been to the city in over a decade, I’d have to leave my firearm at home if I were to ever visit. In a place with the highest crime rate in the state, that seems like a pretty ironic way to handle a legally armed citizen… especially one from your own state. Alas, the NYC gods have their own permits they issue, and word on the street is they only have about 2,000 active permits for a city population of over 8 Million people. I don’t have a calculator, but that’s a small percentage.

In the end, this is home (for now). While we go through the motions of the different processes that simply waste time on everyone’s end, we can’t help but wonder who is going to step up to get some of these necessary changes made to a flawed and painfully slow system.

Previous article: Caught On Camera: Popular Bartender Knocked Out, Robbed, And Then Run Over By Cab While Bystanders Looked On Next article: Sheriff Sued For Denying Concealed Carry Permit To Legal Immmigrant: What's Your Take?