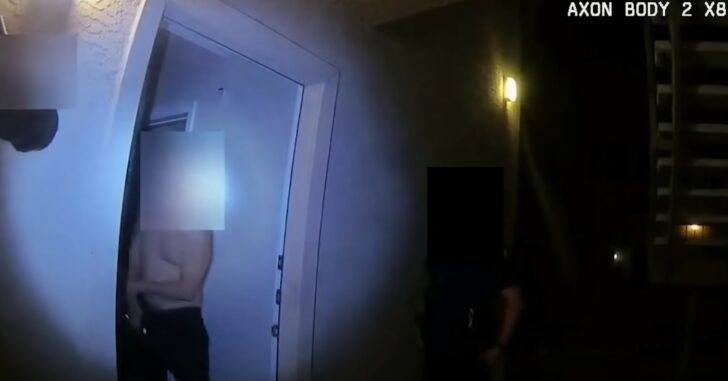 Ryan Whitaker was at home with his girlfriend making salsa and playing a video game when a neighbor called police to report a fight going on. According to the girlfriend, no fight took place other than some possible yelling during the video game.

The caller wanted police to arrive quickly, so he was answering ‘Yes’ to all of the questions asked by the operator.

“It could be physical. I could say yeah if that makes anybody hurry on up. Get anybody here faster.”

Body cam footage also lets us know that both officers were aware of this.

Police arrive to check things out and knock on the door to announce their presence. Ryan answers with a firearm in-hand, since it was late at night and he likely couldn’t see the officers through the peephole since they were both standing to the side.

The next few seconds, from my perspective:

Ryan lay on the ground moaning, and his girlfriend comes out screaming, unsure of what had just happened. The officer tells her to come with him, telling her to calm down as Ryan lays on the ground taking his last breaths.

We see no aid rendered to Ryan, at least on camera, as everyone stands around for what feels like an eternity.

It took the department nearly 2 months to release the footage, and claimed early on in a press release that Ryan had advanced on officers with a gun in his hand.

From an armed citizen standpoint, we can see the steps that Ryan took and understand what was going through his mind and what his actions meant. The officer who fired, however, jumped the gun and no doubt lacks adequate training to handle situations where they meet armed citizens.

Towards the end of the video, the girlfriend is asking the officer if she can go over to see if Ryan is ok. She pleads with him to no avail, even though I’m certain that the officer knew what had just happened was wrong.

His professional response to her:

“I’m leaning towards the fact that he’s not.”

If that were me receiving that response, I’d be irate beyond words and tell the officer that I was going over there regardless, and they’d have to shoot me to stop me. Ok, that’s emotions talking, but who knows.

Previous article: Homeowner Pistol Whipped By Intruders, Gains Access To Gun And Shoots One In Head, Other Escapes After Being Shot Next article: Security Guard Shoots, Kills Man Who Attacked And Stabbed Him