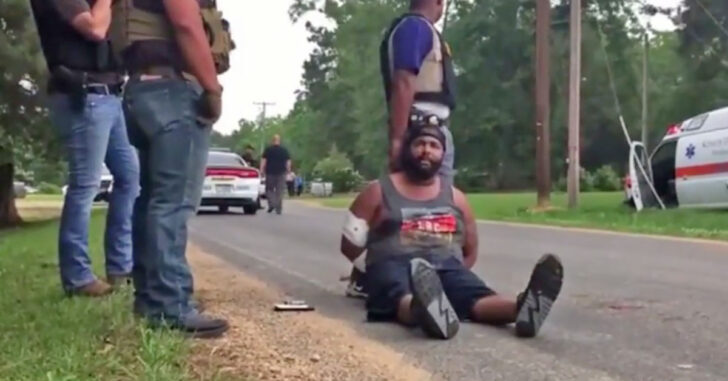 BOGUE CHITTO, MISSISSIPPI — A man who was determined to get custody of his children from his estranged wife went on a murderous rampage Saturday, killing 8 people. The victims included two boys and a police officer.

Willie Corey Godbolt, 35, gunned down his victims at three separate homes in a rural part of the state and only stopped his bloodshed when he ran out of bullets, according to state investigators.

He was taken into custody by local law enforcement after being shot. He told a Clarion-Ledger newspaper reporter at the scene that he had hoped to die in a shootout.

The bloody rampage began at about 11:30 p.m. on Saturday at a home in the town of Bogue Chitto after the Lincoln County Sheriff’s Office received a domestic dispute call.

Godbolt, who lives in Bogue Chitto, shot his victims at three separate homes — two of which were in the nearby town of Brookhaven — according to the Mississippi Bureau of Investigation.

In the video interview below, we witness a rare interview from a person who just committed a mass shooting, and he seems to be relatively calm as he’s speaking with a reporter from the Clarion-Ledger newspaper.

Godbolt told the reporter that a person had called 911 while he was talking with his estranged wife and other members of the family.

When a deputy arrived, Godbolt began to leave and then turned around and started shooting.

The officer who was killed was identified as 36-year-old William Durr, who was with the Lincoln County Sheriff’s Office for 2 years.

The other victims have not yet been identified.

During the interview, Godbolt was asked what’s next for him.

“Death”, Godbolt replied. “My intentions was to have God kill me. I ran out of bullets. Suicide by cop was my intention.”

Godbolt also said that the people who called 911 “cost him his life”, referring to the police officer who was killed. Any sane person, however, would know that it was Godbolt who cost the officer his life, and the lives of the other 7 victims.

In the end, a good guy with a gun stopped this rampage. It’s a sad reality that people are out there who would give their troubles to others by killing. The only thing we have to rely on are armed folks who can be there to step in and take these people out.