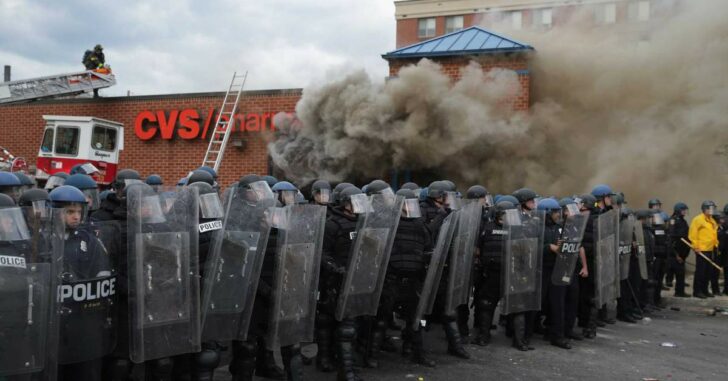 It’s the middle of one of the worst riots in Baltimore’s recent history.  A police-related killing of an unarmed man, a country still reeling from Ferguson – Fox News understandably assigned extra security personnel to their reporters.  One of those extra security officers was a contractor by the name of Donald Scott, a 50 year old father of seven.

Out on the streets, inches from the front lines, Scott did what any major breadwinner would do – seek to protect himself.  His firearms of choice?  According to Baltimore Police reports from the night of May 1, Scott removed his Glock handgun from his waistline and put it into the back of his Chevy Suburban.  And in his waistline was a Cobra revolver.

If this was right across the border in Virginia or Pennsylvania, there likely wouldn’t be a problem.

But in the State of Maryland, that’s where things went wrong – fast.

Baltimore police quickly moved in.  Officer John Potter of the Baltimore Police Department asked Scott if he had a permit to conceal the weapon he had in his waistline and the one he had just placed in his vehicle.

According to the Washington Times, Scott replied he did have a concealed carry weapons permit as well as a permit necessary to store a firearm in his vehicle.  That was, apparently, a lie.  But for the vast majority of law-abiding citizens residing in the State of Maryland, it would’ve been – because only a select few ever receive the coveted and often denied “Handgun Wear and Carry Permit”.  Why?

Maryland does not really acknowledge within its Constitution the inalienable right to keep and bear arms.

Classified as “Smart Gun Laws”, Maryland is one of the few states to impose heavy restrictions upon who may carry a gun.  Amongst other points, the State of Maryland:

So, prior to being stuck in the middle of a veritable war zone with no ability to protect himself or Fox News employees, Scott brought firearms with him.  The State of Maryland will allege on July 1 that this was an illegal act.

The better question – when law enforcement can deny the basic right to bear arms, how would have Scott been able to stay both legal and safe?  Could law enforcement have guaranteed his safety in the middle of a riot?

On the surface, this appears to be an open and shut case.  In almost any state (except those with constitutional carry), it is illegal to conceal a handgun on one’s person.  But in almost every state there is a process whereby a law-abiding citizen shall be able to obtain the legal right to carry a firearm.  In Maryland, that process is broken.  And Scott, looking to protect himself and reporters in the middle of a riot, took a chance.

As the Sun pointed out in their article, Donald Scott was not looking to break laws.  He was merely looking to protect himself should violence come his way.  And now, this father of seven is facing two gun charges which, even if overturned, will guaranteeably bar him from ever legally pursuing a handgun license in the State of Maryland.

The Land of Imaginary Gun Borders

Maryland borders two states where it is perfectly legal to own and carry a firearm – concealed or otherwise.  The states of Pennsylvania, Virginia, and even District of Columbia are “shall permit”.  And in the case of Virginia and Pennsylvania, there are few restrictions of what types of semi-automatic weapons and magazines may be purchased.

In conclusion, as Donald Scott awaits trial for desiring only to protect himself so he may see his family again, we must ask ourselves – what would we have done differently were we placed in his shoes?

This writer, for one, would have told Fox News to find a different security guard… And then move across the border to Virginia.