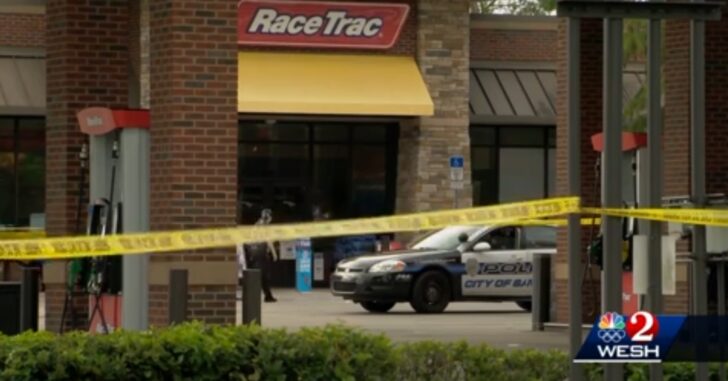 SANFORD, FLORIDA — A man was shot by a concealed carrier following an altercation that was witnessed by several others around 9 a.m. Thursday at the RaceTrac convenience store on Lake Mary Boulevard.

Investigators have determined that two men were involved in a heated verbal altercation inside the store, and that’s when witnesses began calling 911. They described a man who was verbally threatening another. The aggressor exited the store three different times, each time returning and continuing the threats. It ended when the man that was being threatened exited the store, and as he did so, he drew a handgun from his pocket and shot the aggressor.

Police continued to receive additional 911 calls reporting the shooting, including one from a caller who stated, “There’s a guy laying on the pavement here, I’m not sure if he’s shot but I heard about three or four shots. This guy was ranting and raving and yelling at everybody and acting like he wanted to beat somebody up.”

SPD investigators have determined that the man, later identified as 32-year-ol Maurice Holloway, was employed as a delivery driver for Seminole County Public Schools and was driving one of his employer’s vehicles when he stopped at the store.

The man who shot Holloway told police that he had stopped by the store to get something to eat when Holloway entered the store and threatened to kill him. He said that Holloway left the store but then returned with his hand under his shirt. Holloway’s actions lead the man to think that Holloway had a gun. The man who had been threatened then drew his own firearm and shot Holloway several times in the abdomen. Holloway was transported to Central Florida Regional Hospital where he remains in critical condition.

According to authorities, the two men knew each other. “There is a long-standing history of some kind, tumultuous history between those two parties and even additional family members,” said Bianca Gillett, with the Sanford Police Department.

The shooter is a concealed carry permit holder, and Sanford police have decided not to press any charges against him after consulting with the state attorney’s office in the matter. One of the factors taken into consideration was the fact the Holloway stands 6 feet, 8 inches in height and has a threatening stature. Multiple people stated that they not only witnessed his threatening behavior and language directed at the other man, but also feared for their own lives in his presence.

Even though it appears to be a solid case of Florida’s Stand Your Ground defense, it will still be sent to the state attorney for review as a matter of procedure.

Previous article: Home Intruder Picks The Wrong House And Is Shot By An Off-Duty Officer Next article: Wild St. Louis Shootout Reminds Us To Avoid Confrontation, And To Carry A Tourniquet